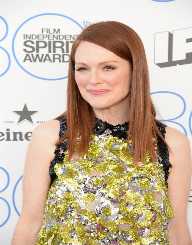 Julianne Moore is a multiple awards winning veteran actress. She has made her lasting mark in the American movie industry and gained worldwide recognition. She is an actress per excellence who has feature or starred in movies and television nearly every year in the past more than thirty years. She has achieved every milestone with sheer hard work and determination.

Julianne Moore was born an army brat. She was born in a United States Army military base Fort Bragg in North Carolina. Her father, Peter Moore Smith, a Paratrooper during the Vietnam War and his wife, Anne love, welcomed their first child, Julie Anne Smith on December 3, 1960. Julie Anne Smith has two younger siblings, sister, Valerie and brother the novelist Peter Moore Smith. Typical of military families, the family moved around a lot. Because of this, Julianne Moore has often said she can’t lay claim to growing up anywhere in particular.

She went to nine different schools because of their mobile life. At the time she never imagined being an actress. She had always wanted to become a doctor.

She attended the Frankfurt American High School from the age of sixteen when her family moved to Germany. After this, she went to the University of Boston. Taking the advice of her English teacher in Frankfurt, who saw her potential, she choose to study theater.

Julie moved to New York City after graduating with a Bachelor of Fine Arts Degree from the University of Boston in 1983. She began working as a waitress to support herself financially while seeking ways to enter into the world of acting. She had to change her name because there was every variation of her name existing in the movie industry. She chose Julianne Moore, taking from both her parents’ names to satisfy them both.

She began her career in 1985 in what is called Off-Broadway Theater. This was because it sat less than regular Broadway theatres. She also started to act on screen. She began to gain recognition in her second screen role in 1986 when she acted a dual role, playing two half-sisters in As The World Turns. She was on the show until 1988. After this she did a CBS soap opera, I’ll Take Manhattan. She then went back to theater plays during which she intermittently made appearances in movies like, Money, Power, Murder (1989), The Last To Go (1991) and Cast A Deadly Spell (1991).

Like many young budding actresses, Julianne Moore was also not spared of the low budget horror movie phase. She made her fist cinematic debut with one of such. It was called Tales From The Dark Side: The Movie. It was a movie she later describe as terrible.

After that unfortunate debut, she had a much better run with, thriller, The Hand That Rocks The Cradle. The movie was a huge success and made number one in box office. Her supporting role character got her to be noticed by a broader audience. She continued to play supporting roles in movies year after year, gaining popularity among movie watchers and critics. During this time she had only one pitfall. She featured in a flopped erotica movie the thriller, Body Of Evidence. When she spoke of this, she said she regretted being a part of this movie.

She had begun working on a workshop theater production since 1990 called Uncle Vanya. Her role in this production attracted film maker Robert Atman to cast her in the multiple awards winning movie, Short Cuts (1993). This movie threw her in the midst of several established actors who were cast in it and this took her a step further in the limelight. This was followed by a movie based on the theater production Uncle Vanya titled Vanya on 42nd Street in 1994. It was also a huge success.

She got her first leading role in a movie in 1995 movie, Safe. It was a low budget movie that turned outenormously successful and earned Julianne Moore even greater recognition as an actress. But all was not well with this career aiding movie. She fell seriously ill because she had to lose considerable weight to properly play the role of an unhappy suburban housewife who develops multiple chemical sensitivity. She decided from there on, never to alter her body for any movie again.

She continued to make appearances in thrillers, dramas, and romantic comedies, with some hugely successful ones and increased critical acclaim. The movie that formed the turning point in her career was the Jurassic Park sequel, The Lost World: Jurassic Park (1997). Her brief appearance in a blockbuster film The Fugitive (1993) had put her in the mind of Stephen Spielberg. He had been so impressed with her that he determined that he would cast her in his film.

She continued to ride the wave of success in the succeeding years with movies like Boogie Nights and Far from Heaven.

It was not, however, all great. She still participated in movies that were heavily criticized and poorly received. Her role in Hours was heavily criticized notwithstanding that she got an Oscar nomination for it. It was said that she basically reenacted the troubled housewife role she played in Far from heaven. Julianne described this as an unfortunate coincidence. Her 2004 movie co-starred with Pierce Brosnan, Laws of Attraction, was criticized and being bland and forgettable. In 2006 she co-starred with Samuel L Jackson in the movie Freedom Land. This also joined the list off heavily criticized and unsuccessful movies. In the same year 2006, she made her debut in Broadway with The Vertical Hour. She was described as wrongly cast here and this debut did not add a feather to her cap. In 2007 she did the movie which she described as her worst film - the movie Next alongside Nicholas Cage and Jessica Biel. The critics agreed with her as the movie received very bad reviews.

Her success as an actress was however not diminished. She continued to perform award winning roles and build on her accomplishments year after year.

Apart from being an actress Julianne Moore is the writer of a bestselling children’s book series. The book series all surround a central character Freckleface Strawberry. This book’s name was inspired by her own experience. She had been bullied as a kid and was often taunted for her freckles with the name Freckleface Strawberry. She had however turned this around with a bestselling book series and a five-book contract with Random House publishers.

Julianne Moore received her first award in 1988 when she won a Daytime Emmy Award for Outstanding Ingénue in a Drama Series, for her dual role in As the World Turns.

The awards and nominations continued to flow from here.

She has two BAFTA nominations for Boogie Nights (1998) and The End Of The Affair (2000). She finally won the award for her brilliant role in Still Alice (2015). She also won an Academy Award for this movie. This made it her first win since being nominated previously for Hours (2003) and The Kids Are All Right (2011). This came along with a Golden Globe Award the same year.

In her years of acting between 1985 and 2016, Julianne Moore has won sixty five awards and seventy nominations for her performance in theater, film, and television.

Some of her awards are not for particular roles but for being great at what she does. She received an Icon Award in 2002 from the Elle Women In Hollywood Awards. And an Actor Award in 2010 from the Gotham Awards.

She has also received some humanitarian awards like that from Mothers Who Make A Difference Award in 2009.

Julianne Moore, the veteran actress who is well known for playing emotionally troubled women is a formidable actress. One of her most prominent traits is her love for orderliness and hatred for disorder. She has also been said to be very firm about her opinions and may sometimes come off as rigid and bossy.

She has spoken of her loneliness during her twenties because she spent so much time on her career and little time cultivating relationships. She made a turnaround in this and is said to be inspiring in the way she balances family and career. She is a major proponent of this, always encouraging her colleagues in the fast paced profession to not neglect one for the other.

Her first marriage to John Gould Rubin lasted from 1986 to 1995. She often described this marriage as hard. She said she went into it too soon and did not want to be there. The divorce was nevertheless a very difficult time for her.

She got a better deal, it appears with her second and current husband Bart Freundlich. She met him when he was her director in Myth Of Fingerprints in 1996. She started a relationship with the nine years younger man, not certain how far it would go. They had their son Cal in December 1997 and their daughter Liv in April 2002. They finally tied the knot and remained together since 2003.