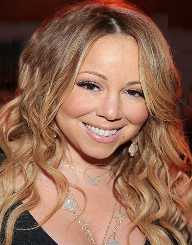 Mariah Carey was born in Huntington, New York on March 27, 1970. Carey began singing at two years of age. She started to take singing lessons when she was four years old.

Carey went to Harborfields High School in Greenlawn, New York. She moved to Manhattan the next day after her high school graduation, to pursue a career in music. She was working as a background singer and also performed in various clubs. During the day, she studied cosmetology and worked as a waitress.

While working in various jobs, Mariah Carey was also writing her music. She wanted to become a singer and was working very hard towards her goal. When Carey was 18 years old, she and her friend singer Brenda Starr went to a party hosted by CBS Records. Carey wanted to give her demo tape to Jerry Greenberg from Columbia records but was intercepted by the president of the company, Tommy Mottola. On his way home, Mottola listened to the album and signed her the next day.

After she was discovered, Carey immediately started to work on her first album Mariah Carey, which came out in 1990. The collection included 4 of her number one hits, like Vision of Love and I Don’t Want to Cry. Two years later her second album was released.

Mariah Carey continued to dominate the music charts. She performed on MTV’s Unplugged in 1992, and her performance was later released as an album. Over the next three years, she released three more albums. Her 1995 single Fantasy included collaborations with hip-hop artists such as Wu-Tang Clan. Her next album Butterfly (1997) continued to show her interest in hip-hop and R&B. Her upcoming album “#1's” included 13 of her No.1 hits and duet with Whitney Houston - The Prince of Egypt, which was nominated for the Academy Award.

In 1999, she began to work on her last album with Colombia records. Her relationship with the company was not good, and Carey finished the work on her album in history three months. The Rainbow became her lowest selling album, although critically acclaimed.

In 2001, Carey received the Billboard’s Artist of the Decade Award and the World Music Award for Best Selling Female Artist of the Millennium. She parted her ways with Columbia Records and signed a $ 100 million five-album deal with Virgin Records America.

A few months later she suffered a physical and emotional breakdown, due to being overworked and ending her relationship with singer Luis Miguel. She was admitted to a hospital in New York and put under psychiatric care.

In 2002, Mariah Carey parted with Virgin Records. After canceling the shows to promote her album and movie debut The Glitter due to personal issues, the record did not generate the desired box office sales. She walked away from Virgin with $50 million and signed with Universal Music Group.

Mariah Carey has sold more than 160 million albums worldwide, becoming the third best-selling female artist of all time. In 2008, Carey’s single Touch My Body became her 18 No.1 hit, more than any other solo artist in the U.S. history. Carey has won 5 Grammy awards, 14 Billboard awards, and 19 World Music Awards.

In 2015 Carey signed a deal to become the diva singer-resident in Las Vegas. Besides singing, Carey has also starred in some movies.

Mariah Carey’s first marriage was to the president of Colombia records, Tommy Mottola. After her success with 1995’s album Daydream, she started to focus on her personal life. Her and Mottola’s creative differences and his controlling nature led to the deterioration of their relationship. The couple divorced in 1998. She dated singer Luis Miguel for three years, but the relationship ended in 2001. In 2008 she married rapper and actor Nick Cannon. The couple had twins, Moroccan and Monroe. In 2014, they separated, and a year later the divorce was finalized.

In 2016, Carey announced the engagement with Australian billionaire James Packer, but later that year the couple split.

Mariah Carey’s net worth in 2015 was estimated to be around 500 million dollars, making her the third highest earning female singer after Celine Dion and Madonna.