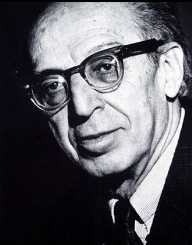 Aaron Copland known in the music circles as the Dean of American Composer was an American writer and composer. Born on November 14, 1900, Aaron Copland was also a composition teacher and music conductor. His musical career ran through genres like vocal works, chamber music as well as opera and film scores.

Aaron Copland became known for what he labelled as the vernacular style, and others termed as populist in the 1930s and 1940s. Some of the compositions, which took this style, include Appalachian Spring, Billy the Kid and Rodeo, Third Symphony and Fanfare for the Common Man. Most of his music was characterized by slowly open changing harmonies, which were the theme at the time and resonate the American landscape and pioneer spirit.

Aaron Copland was born on November 14, 1900, in Brooklyn, New York to Harris Morris Copland and Sarah Mittenthal Copland. Aaron Copland was the last child of five siblings in a family of Conservative Jewish and Lithuanian descent. Aaron Copland interest in music originated from his mother since she played the piano herself. Sarah did organize music lessons for all her kids. Copland's siblings, especially the eldest, Ralph became musically inclined and played the violin proficiently.

His sister, Laurine was skilled in piano assisted him with piano lessons and furthered supported him through his music career. Laurine who was a music student at the Metropolitan Opera School expanded Copland’s music training as she usually brought libretto for him to study. Aaron Copland started writing music around age nine and came out with his highest notated composition Zenatello, which was about seven bars when he was eleven years. Copland was educated at the Boys High School and attended summer camps during vacation.

He expanded his musical lessons taking piano lessons under Leopard Wolfson from 1913 to 1917. Wolfsohn tutored him on the standard classical fare. After acquiring some musical skills, Copland made a debut public performance at a Wanamaker’s recital. Being inspired by a concert by composer-pianist Ignacy Jan Paderewski, he decided to become a composer at age 15. He furthered his music pursuit by attending classes of Rubin Goldmark to study harmony, composition, and theory from 1917 and 1921. As a one of the best teacher and composer of American Music, Goldmark ensured, Aaron Copland had a strong foundation in music, especially in Germanic tradition. During his graduation from Goldmark, he performed a Romantic Style three-movement piano sonata.

Aaron Copland was torn between going to college and traveling to Paris to pursue music. His father wanted him to go to the college while his mother supported his trip to Paris to further pursue music. While in France, Aaron Copland studied at the Fontainebleau with pianist and pedagogue Isidor Philipp and Paul Vidal, a composer. Copland chose to study under Nadia Boulanger upon suggestions by a colleague student as he saw the tutoring of Vidal just like that of his formal trainer Goldmark. He found comfort studying under Boulanger and extended his planned stay in France from one to three years.

After his studies in France, Aaron Copland returned to America where he rented a studio apartment in New York. With his experience and studies in France, he took picked up some lecturing and composition jobs. He taught at The New School for Social Research in New York City from1927 to 1930and later from 1935 to 1938. Aside music, he pursued writing and was a regular contributor to The New York Times, The Musical Quarterly among others. With his compositions, Copland sought to infuse the theme of the time into his compositions, but with lessons learned from other composers who compositions were majority meant for the intellectuals at the time, made his tune accessible to the larger number. To achieve his first goal of American Gebrauchsmusik, he started composing music for young audiences around 1935. Some of these works include the piano pieces The Young Pioneers and an opera The Second Hurricane.

Aaron Copland started his composition career, even before leaving for Paris to further his education. His works at the time were, however short and meant for piano and art songs. In 1920, Aaron Copland released his first work The Cat and the Mouse and followed it with Three Moods in 1921. With his Symphony for Organ and Orchestra, Aaron Copland cemented his credentials as a modern-day composer. His compositions became known for his use of element harmonic and rhythmic elements, which were known to jazz and his fusion of octatonic and whole tone scales, polyrhythmic ostinato figures, and dissonant counterpoint. Employing the twelve-tone technique by Schoenberg, he wrote the Poet Song and in 1929, came out with the Symphonic Ode followed by Piano Variations in 1930. Picking inspiration from his visit to Salon Mexico, he wrote El Salon Mexico and subsequently wrote the ballet score, Billy the Kid and Rodeo.

Aaron Copland came out with several other compositions and ventured into other genres at the peak of his career. This made him one of the finest American composers and writers.

Aaron Copland engaged in several love affairs with men within his circle. He had a love affair with composer turned photographer, Victor Kraft whom he met in 1932. The two are said to have separated in 1944. Aaron Copland also dated others like artist Alvin Ross, painter Prentiss Taylor, composer John Brodbin Kennedy, Pianist Paul Moor and Erik Johns.

Aaron Copland received several awards, including the Presidential Medal of Freedom on September 14, 1964. He received the University of Pennsylvania Glee Club Award of Merit on December 15, 1970, Sanford Medal by the Yale University, National Medal of Arts, 1986 and Congressional Gold Medal by the United States Congress in 1987. Copland’s work composition for Appalachain won him the New York Music Critics’ Circle Award and Pulitzer Prize.