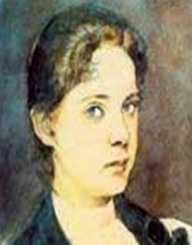 Slava Raskaj was a Croatian artist who lived from 1877 to 1906 and is famed for her watercolours.

Slava Raskaj was born in Ozalj, which is in modern-day Croatia. At the time of her birth, 2 January 1877, Croatia was part of the Kingdom of Croatia – Slavonia which was itself part of the Austro Hungarian Empire. Raskaj’s family was comfortably middle class. Her mother ran a local post office and was also a lover of painting. Olga painted in her spare time, and this fostered a love of art in her children.

Raskaj had one sister, Paula, who became a schoolteacher. Raskaj was born deaf and was sent, aged eight, to a school for the deaf in Vienna. It was at school that Raskaj first learned to draw. She drew pictures, in both ink and pencil, of classical sculptures and some of these early drawings still survive. She also learned German and French in school. As she grew up, Raskaj advanced to watercolour painting.

Slava Raskaj returned home to Ozalj in 1893. Her school teacher though advised she be sent to Zagreb for further training in painting. Bela ?ikošSesija took Raskaj into his studio in Zagreb and began training her in 1896.

Slava Raskaj lived in an institute for deaf and mute children and used a morgue as a studio. Her early style depicted odd still life watercolours of unusual objects such as red roses with owls. These early paintings held a rather macabre tone. Later Raskaj began painting outdoor scenes of Zagreb’s parks. These outdoor scenes had a lighter tone than her early work. Painting outdoor scenes at this time were unusual.

Slava Raskaj's most celebrated works were her outdoor watercolours these include; “Tree in the Snow”, “Spring in Ozalj” and “Winter Landscape”.

Slava Raskaj was born deaf. In her later life, she also developed depression. Her depression began influencing her work and eventually led to her quitting painting. Raskaj developed severe feelings of loneliness and alienation. The depression developed into bouts of aggression in Raskaj.

She was institutionalised as her condition worsened in a psychiatric hospital in Stenjevec. Raskaj contracted tuberculosis and it was this that killed her in 1906.

Slava Raskaj had a bust erected in her honour in Zagreb. She was also honoured by the Croatian National Bank in 2000 with a commemorative coin. A film 100 Minutes of Glory was also made based on events in Raskaj’s life. An education centre providing vocational and practical learning to children with hearing and communication disabilities in Zagreb bears her name.

Raskaj is buried in her hometown of Ozalj. Raskaj was largely ignored by art historians following her death but returned to popularity in the 1990s and early years of the new millennium.