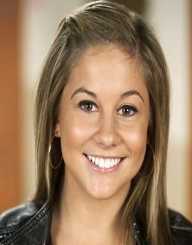 Shawn Johnson was born in 1992 in Iowa, US. Her father is Doug Johnson, mother – Teri Johnson. When Shawn was only three years old, her parents took her to a gymnastics class for the first time. In less than three years, at the age of six, Shawn Johnson had become one of the top students of Liang Chow.

Shawn Johnson went to Valley High School, where she succeeded at creating a healthy balance between sports and social life. Usually, elite female gymnasts train circa 40 hours per week. She managed to train in gymnastics for 25 hours a week, not the usual 40 hours.

Shawn Johnson decided to leave the public school in 2009. She moved to California and there graduated school with the help of a private teacher. Afterwards she started studies at Vanderbilt University, where she studied nutrition and sports psychology. She is studying there since 2013.

The first significant competition Shawn Johnson took part in was the Junior Olympics National Championship. She was at the time twelve years old. Her trainer Chow was not a part of the USA Gymnastics training team, so he contacted the National Team Coordinator to get Shawn Johnson admitted to the National team. He succeeded.

In the year 2005, Shawn Johnson participated in the US Classic and came in third. This won her a lot of attention and recognition. Unfortunately later the same year in US National Championships she was unlucky and fell from the beam and came in the tenth.

The next year in 2006 Shawn Johnson won the US Junior All-Around Championship.

In the year 2007, Shawn Johnson became a sport’s senior and developed her set of skills. She competed in several competitions in the US and outside, and was very successful, ahead of her competitors.

In 2008 Shawn Johnson participated in the Summer Olympics. Johnson won the silver medal in the Olympics.

In the year 2010 during a skiing holiday, Johnson tore a ligament and had to undergo a surgery at the beginning of the year. At the end of the same year, she returned to sports.

In 2011 Shawn Johnson was allowed to compete in international competitions again, after a break, as she had become a member of the US National team again. She participated in Pan American Games and won two medals – a golden for a team competition, and silver for her performance.

Even though Shawn Johnson competed and was successful in 2011, the following year, in 2012, she announced her retirement. She said she retired because of her on-going knee problems after the ligament surgery.

Professional sports is not the only reason why Shawn Johnson is so well recognised. She has also participated in the show “Dancing with the Stars” in the year 2009. In 2009 she became the youngest champion in the show. She returned to the show in 2012 and competed again, and came in the second.

She had also filmed in a music video for a song “Do You Love Me” by Ballas Hough.

Shawn Johnson published a book about herself in 2008. This book “Shawn Johnson: Olympic Champion: Stories Behind the Smile.” It tells the story of her career with pictures and quotations.

Shawn Johnson has appeared in several advertisements, for McDonald’s, Cheerios, Sanofi-Aventis, and others.

Shawn Johnson has participated in several charity events and campaigns. In 2008 she raised money for repairing homes after floods. This campaign she did together with Ashton Kutcher.

Shawn Johnson had a stalker arrested in 2009. The stalker was 34 years old, Robert O’Ryan. He was arrested when he was trying to sneak into the CBS, carrying guns, zip ties, duct tape, and several love letters addressed to Shawn Johnson. His motivation was seeing Johnson on the television. He thought Johnson wanted to be together and have a child together. Robert O’Ryan was admitted not guilty but was taken into a mental care facility for five years.

In 2015 Shawn Johnson stated she had developed an eating disorder in 2008. She ate less than 700 calories a day, to prepare for the Olympic games in 2008.

Shawn Johnson is married. Her husband is Andrew East, who was one of the Oakland Raiders. They married in 2016 and currently reside in Tennessee.