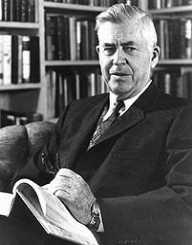 Henry A. Wallace generated lots of controversies and had internal fracases with party leaders as a Vice President under Franklin D. Roosevelt during the World War II. With these feuds, he became unpopular within the party, hence was dropped by the Democrats and was therefore dropped during the 1944 election and replaced by Senator Harry S. Truman. He left the Democratic Party prior to the 1948 presidential election to unsuccessfully contest on the ticket of the Progressive Party. He finished fourth receiving 2.4% of the popular votes.

Henry A. Wallace was born on October 7, 1888, to Henry Cantwell Wallace and May Wallace in Orient, Iowa in the Adair County. His father was a farmer, university professor, author and also served under Warren G. Harding and Coolidge administration as the Secretary of Agriculture. Henry A. Wallace gained interest in agronomy with a young child after the Wallace family accepted the African-American "plant doctor" and future agronomist, George Washington Carver to live in their home.

During his stay, Henry A. Wallace mostly went on a nature walk with him and through that learned the botanical structure of wildflowers and prairie grasses. Even though Carver left when Henry A. Wallace was eight years, his stay had a major influence on him as cultivated his own garden and did experiments on some plants. He enrolled at the Iowa State College in Ames where Henry A. Wallace graduated with a bachelor’s degree in animal husbandry in 1910.

After his graduation, Howard worked as editorial staff of the family’s newspaper, Wallaces’ Farmer in Des Moines from 1910 to 1924. Henry A. Wallace became the chief editor of the paper from 1924 to 1929. With his interest in agriculture, he embarked on several experiments in breeding high-yielding hybrid corn. Henry A. Wallace developed the first corn-hog ratio charts that indicate the probable course of markets in 1915. In 1926, Howard established the Hi-Bred Corn Company, which became the Pioneer Hi-Bred. The venture made Wallace a wealthy man. The company was acquired by DuPont Corporation at a tune of $10 billion in 1999.

In 1940, Franklin Roosevelt selected Henry A. Wallace as his running mate for the 1940 presidential election. His choice created some form of controversies in the Democratic party because of his Republican inclination. During the convention of the party, Henry A. Wallace received 626.3 votes representing 59% while is contender Speaker of the House William B. Bankhead had 329.6 votes. Roosevelt went ahead to win the 1940 presidential election. This made Wallace the last vice president of any political party who never held an elected office as at 2017.

During the World War II, Henry A. Wallace had some fracas with the Secretary of Commerce, Jesse H. Jones on how wartime supplies were handled. This was seen as a slap on the conservative wing of the Democratic Party who were behind Jesse Jones. This continued for a while, and Wallace was finally stripped off his position on the war agencies after he publicly argued Jesse Jones. Henry A. Wallace lost his vice presidential slot during the 1944 Democratic convention. During the first day of the election, Henry A. Wallace took the lead but could not achieve the needed majority to make him.

Henry A. Wallace was married to Ilo Browne in 1914.