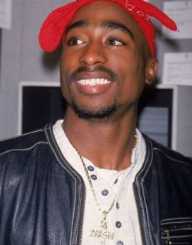 Tupac Shakur was a rapper; he had stage names 2Pac, Makaveli and Pac.

Tupac Amaru Shakur was born Lesane Parish Crooks, on 16 June 1971 in East Harlem, to mother, Afeni Shakur. She changed his name to Tupac Amaru Shakur before he was one year old, after the South American Tupac Amaru II, the last Incan Emperor. He only knew his biological father was Billy Garland much later in life.

Tupac Amaru Shakur attended the Harlem’s 127th Street Repertory Ensemble when he was twelve, where he was cast as Travis Younger in a play A Raisin in the Sun. When his family moved to Baltimore, Maryland in 1986, he studied in Baltimore School for the Arts, moving from Paul Laurence Dunbar High School. Tupac studied acting, ballet, jazz, and poetry; he did Shakespearean plays and many more. He won many rap competitions under the name MC New York, he was considered as the best rapper in school.

In 1988, the family moved to Oakland, California. Living in Marin City, Tupac attended Tamalpais High School and was an active member of the school’s drama club. He studied poetry under Leila Steinberg in 1989, where she organized a concert with Strictly Dope, a former group of his. The concert’s success allowed Tupac to sign with Atron Gregory.

In 1990, Tupac Amaru Shakur was a backup dancer and roadie for hip hop group Digital Underground. He debuted in Same Song soundtrack with Digital Underground and the accompanying music video in album Sex Packets. He released 2Pacalypse Now, in the same year, followed on by a movie career with Juice and Poetic Justice.

Tupac Amaru Shakur formed a group Thug Life in 1993, releasing the only album Thug Life with four other rap artists. It was released initially by Out Da Gutta Records, owned by Tupac. He also used Makaveli as another stage name, inspired by Niccolò Machiavelli, the Italian philosopher. The Don Killuminati: The 7 Day Theory was written in a week and took another week to complete the album, the album was released after his death. Tupac also formed a new group Outlawz.

As a result of sexual- assault charges, Tupac Shakur had to serve his prison sentence in Clinton Correctional Facility in 1995. His new album Me Against the World was released while he was in prison. The record made him the first artist to have a platinum album, and a number one on Billboard 200 while in prison.

During his lifetime, Tupac released four studio albums. After his death, six more albums were released, plus fourteen compilation albums. Proceeds from the sales went to Tupac Amaru Shakur Foundation or TASF, founded to provide training and support for those who aspire to enhance their creative talents. His ten posthumous albums were platinum hits.

Tupac Amaru Shakur appeared in nine films, and he had two more appearances as archived footage in Tupac: Resurrection and Notorious.

On the night of September 7, 1996, Tupac Shakur was hit four times via a drive-by shooting. He was taken to University Medical Center of Southern Nevada, where he was placed in an induced coma after trying to get out of bed. Tupac died of internal bleeding and respiratory failure, causing a heart attack in connection with the gunshot wounds on Sept 13. He was twenty five years old.

Tupac Shakur's body was cremated the next day; it was rumored that the members of Outlawz smoked some of his ashes with some marijuana.

Tupac Amaru Shakur met Jada Pinkett when they were attending Baltimore School of Arts; they remain good friends since. He was briefly married to Keisha Morris; the marriage was annulled twelve months later in 1996. Tupac was engaged to Kidada Jones when he was fatally shot.

Tupac had many brushes with the law, including a jail sentence for an alleged sexual- assault.

His mother Afeni Shakur founded Shakur Family Foundation, changing it to Tupac Amaru Shakur Foundation in 1997.  Her mission was to preserve his memory and help others to achieve their dreams. Tupac’s records sales funded the foundation, and Tupac Amaru Shakur Center for the Arts was built in Stone Mountain, Georgia.

In 2012, he appeared as a Hologram with Snoop Dog at the Coachella Music Festival.

Tupac Shakur was listed as Number One MC by MTV, voted by viewers. He was inducted into Hip- Hop Hall of Fame in 2002.