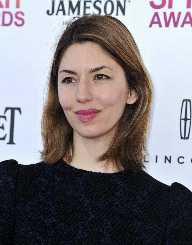 Sofia Carmina Coppola is an American filmmaker and former actress, born on May 14, 1971. Her father is movie screenwriter, director, and producer, Francis Ford Coppola. She made her acting debut as a child actor in his father’s crime drama film, The Godfather in 1972. In 1986, she played a supporting role in Peggy Sue Got Married and played Mary Corleone in The Godfather: Part III in 1990, which earned her negative acclaim and eventually ended her acting career. She then ventured into filmmaking with The Virgin Suicides, 1999, her debut feature film.

She directed Marie Antoinette, 2006, starring Kirsten Dunst. Sofia Coppola won the Golden Lion in 2010, with the drama Somewhere. Her works include The Bling Ring and The Beguiled, which won the Best Director Award at the 2017 Cannes Films Festival, becoming the first American woman to win the award.

Sofia Coppola was born on May 14, 1971, in New York City to Eleanor Coppola and Francis Ford Coppola. Her father was a director and her mother a decorator. Young Coppola grew on her parents’ farm in Rutherford, California. As a child of a director, she gained interest in acting at a very young age and started appearing in her father’s work. She received education at St Helena High School, where she graduated in 1989.

She then enrolled at Mills College and later at the California Institute of the Arts. She, however, dropped out and started the clothing line MilkFed, currently sold exclusively in Japan.

As a child, Sofia Coppola started appearing in her father’s work. She appeared in her father’s drama film The Godfather as Michael Francis Rizzi. She later appeared in second and third Godfather films. She also appeared in several films directed by her father including The Outsider, Rumble Fish, The Cotton Club, and Peggy Sue Got Married. Coppola’s acting career was however characterised with criticisms and perceived favouritism leading to constant negative reviews. Coppola received negative reviews and criticism for her performance in The Godfather Part III, leading to the abrupt end of her acting career.

After bowing out of active acting, Sofia Coppola ventured into filmmaking starting with the short film Lick the Star in 1998. Her feature film debut was The Virgin Suicides in 1999, which received critical acclaim. Coppola then directed the multi-award-winning movie Lost in Translation, 2003, of which she received the Academy Award for Original Screenplay and three Golden Globe Awards. In 2006, Coppola directed the biopic Marie Antoinette, starring Kristen Dunst, and Jason Schwartzman.

Sofia Coppola directed the film Somewhere, 2010, a film shot at Chateau Marmont, starring Stephen Dorff and Elle Fanning. It won the Golden Lion at the Venice Film Festival. Three years later, she directed The Bling Ring, based on the true story Bling Ring, which involved some teenagers in California, who looted the homes of celebrities and made away with monies and properties around $3 million around 2008 and 2009.

The film starred Claire Julien, Emma Watson, Leslie Mann, Taissa Farmiga, Katie Chang and Israel Broussard. She directed A Very Murray Christmas, starring Bill Murray and released on Netflix in December 2015. Her most recent work is The Beguiled, 2017, starring Elle Fanning, Nicole Kidman, and Kirsten Dunst. The film won her Best Director at the Academy Awards, becoming the first American woman to win in that category.

Sofia Coppola married twice first to director Spike Jonze in 1999. The couple first met in 1992. They divorced in 2003. On August 27, 2011, She married musician Thomas Mars who she met while producing a soundtrack to The Virgin Suicides. The couple has two daughters Romy and Cosima.