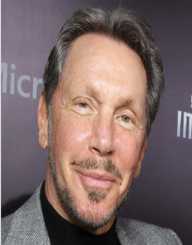 Larry Ellison was born on August 17th, 1944 in Bronx, New York. He is an American entrepreneur who earned his fame by being the co-founder of Oracle. Being a university dropout, he was motivated into the world of computer systems. With time, Ellison was a database developer for the CIA. His success encouraged him to establish his own company.

Larry Ellison was born Lawrence Joseph Ellison on August 17th, 1944. At the time of his birth, his mother was a teenager and was not married. His biological father was in the army and worked as a pilot. Ellison was not brought up by her mother when he was young. When he was aged nine years, he contracted pneumonia leading to his early adoption by his aunt and uncle. After being given up for adoption, the next time he met his biological mother was when he was 48 years old.

After graduating from high school, Larry Ellison went for his college education at the Illinois University located in Champaign. During his first year at the university, he got his early recognition as the science student of the year-1962. Tragedy struck his adoptive parents as his mother died. This devastated him, and he did not sit for his final exams that year.

Later on, he dropped out of school and went on to join the University of Chicago. He studied here for only one semester, and it is also the same place where he first learnt about computer design.

Ultimately, Larry Ellison decided to migrate to Berkeley, California where he would begin a new life. For the entire decade, Ellison moved from job to job trying out his luck in companies such as Wells Fargo, Amdahl Corporation, and several others. Around this period, he grasped necessary computer skills which would later become essential in his career as a developer.

At the Amdahl Company, he later worked as a programmer having honed the necessary computer skills he once had. It is the same organization that he portrayed his computer skills by developing the first mainframe system that was compatible with IBM.

Sooner or later, Larry Ellison partnered with two of his workmates from the Amdahl Corporation to establish Software Development Labs. Within a short period, their computer proficiency was quickly noticed by the CIA, and they landed themselves a contract. They had been assigned to come up with a database management system. This system was given the name Oracle.

Ellison’s company had a few number of employees during the first few years of operation. Their revenues were also minimal as they operated with less than $1Million for a full year. Their career turning point came at a time when IBM signed a contract to make use of Oracle. This had a profound impact on their sales as they went high year after year for the subsequent seven years. This prompted Ellison to give the company the name of the product that brought significant changes, i.e., Oracle.

Things changed in 1986 after the Oracle held its Initial Public Offering. The company almost went bankrupt around this period. Nonetheless, several changes were done to the corporation, and it helped it survive the bankruptcy issue. By the time 1992 approached, Oracle was regarded as the database management market leader.

With the continued success that the company was enjoying, this also benefited Larry Ellison as he was the largest shareholder. This gave him a reason to land on the list of the wealthiest people in the world. The company’s growth was also given a massive boost through the acquisitions that it gained. Some of the companies that it acquired include Siebel Systems, PeopleSoft, Sun Microsystems and several others. By 2014, Oracle had approximately 130, 000 employees

Larry Ellison is a proud owner of one of the largest yachts in the world. His private yacht is called Rising Sun. He has wedded four times. First, he tied the knot with Adda Quinn. His second marriage was to Nancy Wheeler Jenkins before he married Barbara Boothe. Lastly, he wedded Melanie Craft. In all these relationships, he is a father of two kids, Megan and David.