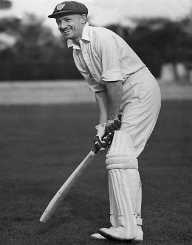 Sir Donald Bradman was born on August 27, 1908, in New South Wales, Australia. His parents were Emily and George Bradman. He also had four older siblings.

Even as a child, Donald Bradman was athletically talented. He played cricket in his back garden as a child and went on to play the game on his school’s team (Bowral Public School). He later graduated in 1922.

Donald Bradman made his professional cricket debut in 1927; in this debut, he earned 118 runs. He was then put on the New South Wales Team.  In the next year, he had a test match. He did poorly in the first round of testing, but his scores in later tests were impressive enough to earn him a spot in the Ashes series in 1930. In this these test matches, he hit centuries in each round.

Throughout the 1930’s, Bradman’s popular spiked. During this time, sports in Australia, in general, were also growing in popularity. From 1932 to 1933, Bradman played in the Ashes series. This would later be known as one of the hardest series that Bradman would ever play in. Many risky moves were played in this game. Sadly, England won the series.

In 1934, Donald Bradman left the New South Wales Team. In the next year, he joined the South Australia team. In the later part of the 1930’s, he did well. His team toured England. While on this tour, he earned 13 centuries in just 26 innings, which is about half a century per inning.

With the havoc of World War II enveloping Europe and many other countries around the world, not many people were paying much attention to cricket in the late 1930’s and early 1940’s. In 1940, Donald Bradman decided to take a break from his cricket career to join the Royal Australian Air Force.

Soon after joining the air force, Donald Bradman was transferred to the Army, where he served as a Lieutenant. He went through all of the required training, but the stress of the job and the physical toll of being in the army was too much for his body to handle. He left the military for this reason in 1941.

After being discharged from the army, Donald Bradman returned to playing cricket. Once again, he was playing for the South Australia team. He continued to play with this team until he retired from cricket in 1948.

While playing cricket, Donald Bradman had some impressive stats. Throughout his whole career, he made almost 7000 runs in only 52 matches. He also holds the world record for most runs in a series (984).

In the 1970’s, Donald Bradman worked as a member of the Australian Cricket Board.

Most all of Bradman’s accomplishments are due to his wonderful cricket skills. Some of his most prestigious awards are listed below.

In 1949, Donald Bradman was made a Knight Bachelor.
In 1979, he was made a Companion of the Order of Australia.
In 2000, he was named the best cricket player of the 20th century by the Wisden Cricket Almanack.
In 2009, years after his death, he was inducted into the Cricket Hall of Fame.

Donald Bradman married Martha Menzies in 1932. Together, the couple had three children. Sadly, all of his children suffered from various health problems. One of his sons even died as an infant. Bradman and Menzies stayed married for Menzies’s entire life. She died in 1997. Donald Bradman was devastated by her death and never remarried.

During his lifetime, the Bradman Museum was created in his honor. This museum holds many historical and famous cricket items.

Bradman’s face has been featured on stamps and coins in Australia.