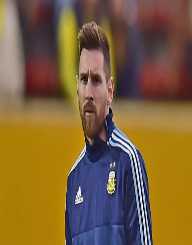 Luis Lionel Andres Messi was born on June 24, 1987, in Rosario, Argentina. His father was a steel factory manager, and his mother worked at a magnet manufacturing workshop. He was third of four children in the family. He began to be interested in football from an early age and followed his older brothers to the football field. He joined the local club Grandoli when he was four years old. At the age of six, Messi joined the Rosario club Newell’s Old Boys. When he was ten years old, Messi was diagnosed with growth hormone deficiency. His future in professional football was threatened, but the Newell’s Old Boys club agree to pay for his treatment.

Buenos Aires club River Plate scouted Messi, but the club was not able to pay for his treatment. Messi and his family then moved to Catalonia and arranged him a trial with Barcelona FC. The following year, a contract was signed, and Messi began to play with Infantiles youth academy. In 2002, he began playing in competitions.

Messi broke many Barcelona’s records from the very beginning of his career, including becoming the youngest player to score for the franchise. He played for the Juveniles A, then joined Barcelona C division and quickly moved up the ranks. His first professional contract was signed in 2004, worth 30 million Euro. Just a month after signing the contract, he debuted with division B and his salary was increased to 80 million. In 2005, Messi signed a contract as a senior player for the team. He acquired Spanish citizenship in September 2005 and became eligible to play in La Liga.

Messi quickly established himself as one of the best rising talents in the world. When team’s star player Ronaldinho began to lose his form, Messi became the team's new star, is only 20 years old. That year he was voted second for the FIFA World Player of the Year award. After the departure of Ronaldinho and Rijkaard, Messi signed a contract with an annual salary of 7.8 million euros.

In 2009, Barcelona became the first club to achieve six top trophies in a single year, winning Supercopa de Espana and UEFA Super Cup, as well as the FIFA Club World Cup. Messi won the FIFA World Player of the Year award. In 2011, Messi also scored twice in the FIFA Club World Cup winning the Golden Ball as the best player. The same year, he also became the fourth player in history to win the FIFA Ballon d’Or for the third time.

In 2012, Messi helped his club achieve their best-ever start of the La Liga season. In the middle of the competition, he had scored 55 points for the club- a Spanish club record. He became Barcelona’s all-time top scorer in La Liga the same year. He also won the Ballon d’Or award for the fourth time, becoming the first player in history with this record.

In 2013, during his ninth year with Barcelona, Messi signed a new contract with the club until 2018 and became the team’s captain. However, his previous muscle injuries began to resurface, and Messi did not make frequent appearances. Without Messi, Barcelona suffered major losses. During the 2014 season, Messi regained his strength and again broke several records with his major scores.

During the 2015 season, there were speculations that Messi might leave the club. Together with Suarez and Neymar, the trio scored 122 goals in the season, which became a record in Spanish football. In the 2015-16 season, Barcelona won the UEFA Super Cup. In 2016, Messi reached his 300th league goal. At the end of the season, he had 51 goals, making him Europe’s top scorer.

Messi began dating Antonella Roccuzzo, a girl from Rosario when he was 20 years old. The two knew each other since he was five years old. The couple has two sons. Messi has a close relationship with his family, especially his mother. The family is also directly involved in his career. Messi opened the Leo Messi Foundation to take care of matters in Rosario.

Messi has been involved in various charities to aid children in need. He has contributed to UNICEF and was appointed goodwill ambassador in 2010. He has taken part in campaigns targeted to prevent HIV and aid education and social inclusion of disabled children. Leo Messi Foundation also supports health care, education and sports opportunities for children. He has also aided the development of medical centers in Argentina and Spain. Messi also takes part in various fundraising activities, like “Messi and Friends” football matches. He also financially supports Rosario football club Sarmiento.