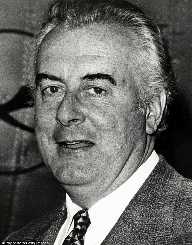 Gough Whitlam was born on July 11, 1916, in Kew, Melbourne, Australia. His name at birth was Edward Gough Whitlam but went by his middle name as his grandfather was also named Edward. Gough Whitlam's father Fred was a Crown solicitor and often moved for his job. The family followed him from Melbourne to Sydney then Canberra.

Since the family sometimes moved during his childhood, Gough Whitlam attended some primary and grammar schools. When he lived in Canberra, he attended the government Telopea Park School. Gough Whitlam later transferred to Canberra Grammar School. After high school, Whitlam attended St. Paul's College at the University of Sydney. During his time there, he was an editor for the college journal and the magazine.

Gough Whitlam graduated with a Bachelor of Arts degree in classics. He continued to study law when World War II started.

Gough Whitlam registered for the Royal Australian Air Force when the war started. However, he was not called to service until 1942. As part of that service, he was a navigator with orders to protect some of the convoys in Northern Australia. Near the end of the war, Whitlam joined the Labor Party. He also completed his law degree and was admitted to the New South Wales and federal courts. Whitlam was active in local politics, which helped him when he ran for House of Representatives in 1952.

Gough Whitlam enacted the Family Law Act with the first “no-fault divorce law.” However, his time as Prime Minister had many roadblocks. When the parliament could not pass a budget in 1975, the governor at that time John Kerr dismissed Whitlam from his position. Not only did Gough Whitlam lose the election in 1977, but Gough Whitlam also resigned from the party leadership position and parliament.

Gough Whitlam married Margaret Elaine Dovey. She was a swimmer in the 1938 British Empire Games. The couple had four children. Gough Whitlam died on October 21, 2014, at the age of 98. During his time as Prime Minister, Gough Whitlam dealt with many policies and issues in that short amount of time. He had to deal with the constitutional crisis, but Gough Whitlam also instituted universal health care and university education fee elimination.

Gough Whitlam is also noted to have eliminated military conscription and criminal execution. In 2000, the University of Western Sydney developed the Whitlam Institute in his honor.

Gough Whitlam was awarded the Companion of the Order of Australia in 1978. It was for his dedication to human rights and the environment. In 1983, Gough Whitlam was appointed the Australian Ambassador to UNESCO. As ambassador, he was involved in the World Heritage Committee as well as the Independent Commission on International Humanitarian Issues.