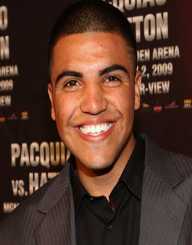 Victor Ortiz was born on 31st January 1987, in Garden City, Kansas, in the United States. His parents were originally from Mexico, and Ortiz is one of six children. Victor Ortiz came from a broken home, with his mother abandoning the family when Ortiz was seven years old. Shortly after, Ortiz’s father took up alcohol and started beating the children. His father, too, abandoned the family five years later.

Victor Ortiz had taken up boxing at a young age upon the insistence of his father. After both parents abandoned the family, the children entered the Kansas foster care system.

In 2002, Ortiz’s older sister became an adult of legal age, and she moved to Denver in Colorado. Ortiz moved in with her, along with his younger brother.

Ortiz’s amateur career started in 2003. He was noticed by a former boxer, Ron Lyle, while training at the center Lyle managed. Lyle trained  Victor Ortiz on win a Junior Olympics tournament. During the same tournament, Ortiz was noticed by Roberto Garcia, another former boxer. Garcia lived in California but offered to train Ortiz, so Ortiz accepted the offer and made a move to California. He trained at La Colonia Youth Boxing Club, and studied at Pacifica High School, from where he graduated.

Victor Ortiz won the Police Athletic League national championships in 2003, and the following year competed in the trials for the U.S. Olympic boxing team, but only made it to the semi-finals.

In 2004, Ortiz turned professional, at the age of 17. At age 18, when he legally became an adult, Ortiz managed to gain custody of his younger brother. He trained at The Garden City Boxing Club and had several trainers who between them escalated his career as a boxer. He won the Ringside National Title in both 2001 and 2002, and then the National Junior Olympics in 2002.

His first seven fights were easily won, but his next fight was controversial. It was deemed he knocked out his opponent after the referee had ordered the pair to separate. Ortiz’s opponent was awarded the fight as his knockout punch was classified as illegal.

Victor Ortiz continued to win his following fights, and at one stage had a record of 18 wins, one draw, and one loss. Ortiz sacked Roberto Garcia and Garcia’s father and switched trainers.

In June 2009, Ortiz competed again Marcos Rene Maidana from Argentina, for the Interim WBA Light Welterweight Title. Both boxers were knocked down several times during the fight. After the sixth round, the ringside physician stopped the fight, saying Ortiz was not fit to continue. Ortiz received criticism from the media for not continuing.

In December the same year,  Victor Ortiz had a comeback fight which he won, and he also won the fight after that. His next three fights were wins, and then he had a draw. Victor Ortiz fought against boxers such as Lamont Peterson, Antonio Diaz, and Hector Alatorre.

In April 2011, Ortiz fought in the Welterweight division. He won the WBC Welterweight title again Andre Berto. He followed up his win with a fight against Floyd Mayweather Jr. to retain the title, but when his arms were down at one stage during the fight, Mayweather knocked him out, and  Victor Ortiz was unable to get back to his feet.

The following year, Ortiz had his jaw broken in a fight with Josesito Lopez. He then lost his next fight in January 2014, and in December 2014, he injured his hand in a fight which then took several months to heal.

Victor Ortiz lost in April 2016 in a rematch with Berto, but then in June 2017, had a successful comeback again Saul Corral. In February 2018, he won a close match against Devon Alexander, two-weight world champion.

During his professional career, Ortiz had 41 fights. He won 25 by knockout, seven by decision, and had three draws. He lost only five and had one disqualification.

In recent years, Victor Ortiz has transitioned into acting. In 2016 he appeared in episodes of both Ray Donovan and Hawaii Five-O.