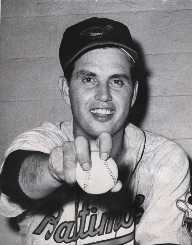 Hoyt Wilhelm was an American baseball player, known by the nickname “Old Folks”.

James Hoyt Wilhelm was born in the town of Huntersville, North Carolina, on July 26, 1922. His parents, John and Ethel, were farmers. He had ten siblings. He studied at Cornelius High School. He served in the U. S. Army stationed in Europe during World War II. He took part in the Battle of the Bulge, from which he ended up with a piece of shrapnel lodged in his back for the rest of his life. He earned the Purple Heart military decoration and he earned the rank of staff sergeant.

Wilhelm first started playing baseball in high school. In 1942, he joined the Mooresville Moors, a Class D minor league team. In 1947, he was purchased by the Boston Braves, and soon after by the New York Giants. He spent the next few years playing for the Knoxville Smokies, the Jacksonville Tars, and the Minneapolis Millers.

After his retirement, Wilhelm was the manager for two minor league teams – the Greenwood Braves and the Kingsport Braves. He was the pitching coach for the New York Yankees minor league team. He also worked with some major league players who needed to improve their pitch.

During his time in Jacksonville, Wilhelm met a woman called Peggy Reeves. They got married soon after. They had two daughters, named Patti and Pam, and a son named Jim.

Hoyt Wilhelm passed away from heart failure on August 23, 2002, in a nursing home in Florida. He was 80 years old.

Wilhelm is considered to be one of the best knuckleball pitchers in baseball history. He is also known as one of the oldest professional sports players, having played until the age of 50. In 1985, he became a part of the Baseball Hall of Fame. In 2013, he was referenced in an episode of the TV show The Wire.