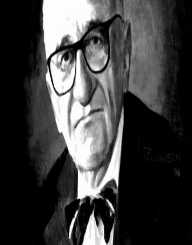 Murray Rothbard was born on March 2, 1926, in the Bronx. His parents David and Rae Rothbard were Jewish immigrants from Poland and Russia. His father was a chemist. When Rothbard was still a baby, the family moved to the Upper West Side of Manhattan, where he attended the Birch Wathen school.

After high school, Rothbard went to study at the Columbia University and earned a Bachelor of Arts degree in mathematics in 1945. In 1956, he earned his Ph.D. in economics. Rothbard was politically a leftist and was greatly influenced by the Austrian economist Ludwig von Mises. He attended Mises lectures at the New York University Business School. Rothbard attracted attention from the William Volker Fund, which paid him to write a textbook to explain Mises book Human Action, which resulted in the book Man, Economy, and State.

In 1953, Murray Rothbard got married to Joann Schumacher, who was his editor and adviser. She also later hosted the Rothbard Salon. The money from Volker Fund allowed Rothbard to work as a freelance theorist for the first fifteen years of their marriage. When the fund collapsed in 1962, he began working for various New York academic institutions. In 1966, he began working at the Brooklyn Polytechnic Institute.

Rothbard left the Polytechnic in 1986 and began working at the Lee Business School at the University of Nevada, in Las Vegas. There he held the S.J. Hall Distinguished Professor of Economics title. Although he was not satisfied with the work as a teacher, he attracted a lot of attention with his writings. He is often seen as the creator and one of the principal agents of the contemporary libertarian movement. In 1976, he founded the Center for Libertarian Studies and the following year, released the Journal of Libertarian Studies. In 1982, Rothbard became the co-founder of the Ludwig von Mises Institute in Auburn, Alabama. He founded the institution's journal Quarterly Journal of Austrian Economics in 1987.