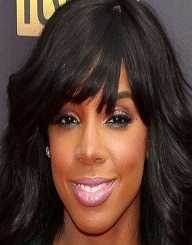 Kelly Rowland is a 36-year-old American celebrity born on February 11, 1981. She is an R&B singer associated with the famous girl group of the late 1990s Destiny’s Child alongside other singers. She is a songwriter, singer, actress and television personality who has sold over 40 million records. Kelly has also been awarded a number of awards like Grammy Awards and Soul Train Music Awards.

Kelly Rowland was known as Kelendria Trene Rowland when she was a child. She was born in Atlanta, Georgia in 1981, February 11 to Christopher Lovett and Doris Rowland Garrison. Rowland began singing at a tender age in the church choir with Whitney Houston and Janet Jackson being her role models. She could virtually do everything Whitney did and loved her performances in which she took a keen interest.

Rowland’s mother relocated to Texas with the children leaving her father because of domestic violence. While in Texas, Kelly met Beyoncé Knowles who was also an upcoming songster. Kelly’s mother left her under the care and guardianship of the Knowles for some time.

Kelly Rowland and Beyoncé did several performances as members of the Girl’s tyme band in talent shows and several events in Houston. With great talent and growth in singing and dancing, they registered their girls' group under the name Destiny’s Child in 1993. The girls became famous in a short time and in 1997 they received a recording deal with Columbia with Matthew Knowles as their manager.

Working as a trio, Destiny’s Child released their hit song ‘Killing Time’ in 1997 which also became the soundtrack for ‘Men in Black’ film. After this song, the group released two albums the first one being the 1999 album ‘Writing’s on the Wall’ where over 15 million copies were sold. This album also became their best-selling album with it earning them a Grammy Award. They later did ‘Independent Women Part I’ which also acted as the soundtrack for the film ‘Charlie’s Angels’ in 2000.

With this rise to fame, the trio did their third album in 2001 known as Survivor which sold over twelve million copies. The Destiny’s Child members, however, parted ways to begin solo careers.

Solo Career in Music and Acting

By the time Kelly Rowland was parting with the Destiny’s Child, she was already a millionaire teenager. She collaborated with Nelly on the hit song ‘Dilemma’ in 2001 which was also elected as the best-sung collaboration for the Grammy awards. With this as Rowland’s first single as a solo, she became even more exposed to the music industry. Success after success followed her course and in 2002, she released her first album ‘Simply Deep’ which became her best-selling album in the U.S.

Rowland also pursued an acting career the same year after releasing the album Simply Deep. She took the roles of Carly in ‘The Hughley’s’ and Martha Reeves in ‘American Dreams.’ She also featured in the top selling movie in the year 2003 known as ‘Freddy vs. Jason' playing the role of Kia Waterson. Rowland also starred in the comedy ‘The Seat Filler’ in 2005 and featured in the film ‘Think Like a Man’ in 2012.

Kelly Rowland embarked on her music career releasing a second album as a solo in 2007. The album ‘Ms. Kelly’ however, did not do well which made her let go of Michael Knowles. Later in 2011, she released another solo album ‘Here I Am’ which received positive reviews.

Kelly Rowland got married to her three years fiancée and manager Tim Witherspoon on May 9, 2014, in Costa Rica. The couple had their first child on November 4, 2014, Titan Jewell Witherspoon.