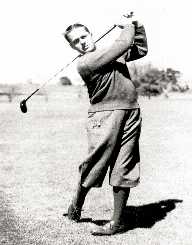 Bobby Jones was born on March 17th, 1902 in Atlanta, Georgia in the United States. He is one of the most famous golfers in history. Besides his profession as a golfer, Jones was also a lawyer. Being an influential figure in the history of golf, Jones is credited with being among the founders of Augusta National Golf Club. In addition to this, he was also the co-founder of the famous Masters Tournament in golfing. His innovations at that time are continuously being used today on a global scale. His prowess in golf was evident both when he was an amateur and during a time when he decided to play golf as a professional.

While playing as an amateur, Jones dominated the golf competition while at the same time competing with the world’s best golfers in the period from 1923-1930. This was also his peak period as a golfer. Jones passed away at the age of 69 in 1971.

Bobby Jones was born on March 17th in 1902. His father was called Robert Purmedus Jones. He worked as a professional lawyer. When Jones was a young man, he battled several health issues. The doctors advised him to play golf as a way of gaining strength for his overall wellbeing. Fortunately, for Jones, this was a game that he was born to play. Soon, his love for golf took him to places and earned him a recognition that he lacked before. He perfected his golfing skills which enabled him to win kid’s golf tournaments.

In 1916, Jones competed in his first major golf competition and emerged victorious after winning the Georgia Amateur Championship. This tournament was conducted at the Capital City Club. His first major victory at the tender age of 14 brought Jones to the nation’s spotlight as a talent to watch. Among the many, that admired the young talent was the United States Golf Association. The made a move to invite Jones to contest at the U.S. Amateur which was hosted at Merion. He proved that he was exceptionally talented as he proceeded comfortably to the quarterfinals in his first participation at the tournament.

Ultimately, Jones went professional in his golfing career, and 1923 marked his first U.S Open victory. From this time to the 1930s, Jones won thirteen major golf competitions in the twenty attempts that he had made. Still, within this period, he broke the golfing record by becoming the first ever player to win The Double. He had won both the British and the U.S. Open Championships in 1926.

The year 1930 marked a record-breaking year for Jones. He still holds the record for winning four major competitions within the same year-1930. This winning record was termed as the Grand Slam. In this year 1930, Jones was the winner of The Amateur Championship, The Open Championship, U.S. Open, and U.S. Amateur. This is a record that has not been shaken in the world of gold to this date. Before competing in these tournaments, Jones had wagered with British bookmakers that he would bag home all titles at the odds of 50 to 1. Winning all four major competitions meant that he also won more than $60, 000 from the gambling fraternity.

After his major victory in 1930, Bobby Jones was a nationwide celebrity. He attracted film production companies such as Warner Brothers. In 1931, Jones featured in several golf-instructional films produced by the film company. He first appeared in How I Play Golf-1931. This was produced as a series, and it had 12 short films. In 1933, he featured in How to Break 90 which had six films within it. Both film series acted as instructional videos that would allow the amateur golfer to learn the art of golfing that Jones was skilled at.

Bobby Jones tied the knot with Mary Rice Malone in the year 1924. Together, the couple had three children including Clara Malone, Robert Tyre III, and their last born Mary Ellen.

Bobby Jones passed away on December 18th, 1971 in Atlanta. He had earlier been diagnosed with syringomyelia. The disease paralyzed Jones leaving him in a wheelchair. This was later the cause of his death at the age of 69.