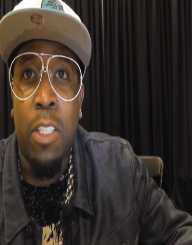 Antwan Andre Patton was born on the 1 February 1975. He is an American rapper, songwriter and record producer who goes by the name of Big Boi. Patton spent his early childhood in Georgia and later moved to Atlanta where he lived with an aunt.

When Patton was at school in Atlanta, he developed an interest in hip-hop music. Andre 3000 Benjamin was attending the same class. The two musicians formed Outkast and soon signed with LaFace Records. The message their music sent out was from an African American viewpoint of society, mainly from a political stance. There’s no ambiguity to be found in the lyrics of Sumthin’s Gotta Give.

The band released four albums. After this, they decided to each makes a solo album. Antwan Andre Patton did Speakerboxx and Andre 3000, The Love Below. These two solo albums were released as one double album product. Later, a single was discharged from each of the records. The Way You Move was Patton’s single; Andre 3000’s Hey Ya. Patton then released another single, Need & Want You.

In 2007, Sir Lucious Left Foot: The Son of Chico Dusty came out. The debut single was Dusty Flush. Big Boi then followed this up with Daddy Fat Sax: Soul Funk Crusader.

In 2007, Antwan Andre Patton was nominated for the Black Reel Awards: Best Original Score for Idlewild (2006). His 2009 Grammy nomination for Best Rap Performance by a Duo or Group was for the song Royal Flush; he shared this with Andre Benjamin.

Patton received two Grammy Award nominations in 2011 One for Best Rap Performance by a Duo or Group. He shared this Phillip Thomas (Cutty Ranks). And another nomination for Best Urban: Alternative Performance for Tightrope. Patton shared this nomination with Janelle Monae.

Antwan Andre Patton is married to Sherlita, and they have a son Cross and a daughter Jordan. He also has a son from a past relationship, Bamboo. Patton and Sherlita married in 2003. Sherlita filed for divorce in 2013; the couple has since reunited. Sherlita is interested in fashion and has owned some high profile outlets including. PValentine was featured in an episode of My Super Sweet 16.

Antwan Andre Patton is an animal lover and is a registered breeder of Pit Bulls. He is the owner-operator of Pitfall Kennels in Fairburn, Georgia.

In 2011, US Immigration and Customs Enforcement apprehended Antwan Andre Patton at the Port of Miami after a drug canine alerted officials. Patton was charged with being in possession of ecstasy. Residual marijuana had also been found in a cigarette roller. Bailed on a $16,000 bond, Patton duly appeared in a Miami courtroom and was fined $2,000 (to be paid to charities) and have to agree to undergo mandatory drug testing for three months. He faced felony charges but the deal done was that if he were found to be drug-free during the testing period, the costs would be nullified.