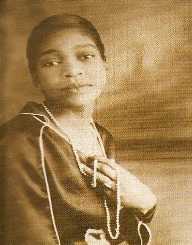 Bessie Smith was a famous American blues singer, with great popularity between 1920 and 1930. Her legacy lives on, and she is still considered by many as one of the best singers of her time with an everlasting mark on other jazz singers.  Due to this, she was once nicknamed `Empress of the blues.’

Bessie worked hard to build her career amidst various difficulties in her personal life. She began her career as a classic blues singer and often brought out great passion, heart, and soul in her music. Her career also had a brief part in films and Broadway.

Bessie Smith was born on 15th April 1894, in Chattanooga, Tennessee. Her parents were William Smith and Laura Owens. William was a laborer and a Baptist preacher but died when Bessie was still too young. The family consisted of six other children to the couple. When Bessie attained nine years, she also lost her mother and brother. This forced her sister Viola to assume the responsibility for the family.

At this time Bessie began singing and dancing in the streets of Chattanooga in a bid to help their family raise money. Her brother Andrew helped her, and his role was to play the guitar. In 1904, her oldest brother Clarence relocated after joining a specific traveling troupe but could not take Bessie with him due to her tender age at the time.

However, he returned eight years later with the traveling troupe, `the Stokes troupe.’ In association with the troupe’s manager, Clarence organized an audition for his baby sister. She was successful on the test and got hired a dancer. However, this was contrary to her main singing talents, but could not be taken up as the singer.

This is because the company had an established singer already, named Ma Rainey. Bessie gained progress, and in next to no time, she performed on various shows and joined `Theatre owners booking associations.’ While there, she signed a recording contract with Columbia records.

Stage performances as part of her career came first at around 1913. Bessie Smith could develop her acts and started performing at Atlantis 81 theatre. This helped her gain much reputation, and by 1920, she had thousands of sales regarding copies of her songs, i.e., `crazy blues.’ Her performances were top notch and caught the eye of a talent agent Frank Walker. In the year 1923, he signed her to Columbia records. Bessie’s debut album became an instant hit, with a famous single called `Downhearted blues.’ It had a high number of sales, an average of 800,000. This was a massive number of album sales at the time.

It is this point in time that Bessie Smith became one of the tops most essential artists in the blues arena.  Due to this, she was able to collaborate with other renowned in blues artists for example; Fletcher Henderson, Don Redman, Louis Armstrong, James P Johnson and Coleman Hawkins.

Due to this, Bessie featured in a couple of the most famous albums during the 1923 to 1937 time frame. One of the most outstanding of this was `St Louis Blues’ that involved collaborations with the famous Louis Armstrong. In total, Bessie is known to have made an average of about 160 recordings during her time at Columbia records.

Bessie featured in the film `St Louis Blues’ in the year 1929. Together with Fletcher Henderson Orchestra among others, they came up with the title soundtrack for the movie. Bessie was at the top of her career at this time; her fame spread out through North and South America. She frequently traveled to all of these parts for shows. She had gained a great fan base and was one of the highest paid in the business.

In the year 1933, Bessie Smith came up with recordings with `Okeh.’ This was after persuasion and arrangements by John Hammond and featured artists like Jack Teagarden and Benny Goodman. Many view this record as a transformation of her productions, from blues artistry to the relatively modern swing era.

Bessie soon stopped recording with Columbia records, mainly because of the high depression. It is argued that due to the high financial distress, and a coincidental decline in demand for classic blues, Columbia Records dropped her but she still maintained her popularity and held shows that attracted a large number of fans.

Some of Bessie Smith’s recordings have been incorporated in the Grammy hall of fame. This category is mainly for songs that have historical significance or certain recognized quality. Also, they must be more than 25 years old.

Bessie’s own life also consisted of various turbulences just like her career. Bessie Smith got married to a man named Jack Gee in 1923. The marriage was unfaithful, and both of them are known to have committed various infidelities. Bessie was bisexual and had relations with Gertrude Saunders. Gee found out about the relationship, and could not come to terms with it. This led to their split up.

After the divorce, Bessie later met Richard Morgan. They got married, and the relationship worked out until her death. During her lifetime, she is said to have had a significant impact on younger singers who viewed her as a role model. An HBO film has illustrated a story of her life.

Bessie Smith died on 26th September 1937. She was traveling with her spouse Richard Morgan between Memphis, Tennessee, and Clarksdale, Mississippi. It is alleged that Richard misjudged a truck ahead of him, and hit it at top speed. She did not die on the spot, but only sustained injuries and lost a lot of blood. However, there were a lot of delays before she could eventually get to the hospital.

Some rumors claim that she could not be admitted to some white’s hospitals due to her skin color. Bessie did not regain any consciousness since the accident and died the following morning. Her funeral was at Philadelphia on October 4, 1937. Sadly, Bessie Smith was scheduled for some recording works just before her death.