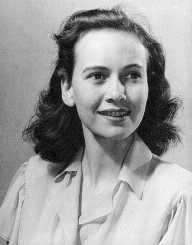 Teresa Wright was born on October 27th, 1918 in Harlem, New York City. She quickly rose to fame after featuring on her first role in The Little Foxes - 1941. Her remarkable performance earned her an Academy Award nominations for her first role in the film industry. In 1942, she was bestowed with an Academy Award as the Best Supporting Actress in the film Mrs. Miniver. The same year, she starred in Pride of the Yankees which also earned her an Academy Award. Wright is also highly acclaimed for her role in films such as Shadow of a Doubt- 1943 and The Best Years of Our Lives – 1946.

Teresa Wright was born Muriel Teresa Wright on October 27th, 1918. She was the daughter of Martha and Arthur Hendricksen Wright. Her father worked as an insurance agent. Her parents did not live together for long after her birth as they went separate ways. She enrolled at Columbia High School for her early education. Her interest in acting came up as a result of motivation she saw in Helen Hayes. From here, she began featuring in school plays where she was the lead actor on several occasions. Soon, she earned herself a scholarship at the Wharf Theater located in Provincetown in Massachusetts. She later graduated from high school in 1938 and migrated to the New York City where she changed her name to Teresa Wright.

At the beginning of her acting career, Wright featured on stage with plays such as Life with Father. This led to her discovery by Samuel Goldwyn. Noticing her natural acting talent, Goldwyn hired her to feature in The Little Foxes as Alexandra Giddens. This was also followed by a 5-year acting contract with Goldwyn Studios. Later in 1941, Wright received her first Academy Award nominations for the role she played in her debut film. In 1942, she still earned nominations for her role in The Pride of the Yankees. She was acting alongside Gary Cooper in this film. Still, in 1942, Wright was bestowed with her first Academy Award for the film Mrs. Miniver. This was a rare achievement considering the fact that she was quickly recognized and got high acclaim for her first three films.

Teresa Wright continued to enjoy her success on screen during the 80s with notable roles in Somewhere in Time – 1980 and The Good Mother – 1988. She also featured in The Rainmaker – 1997.

Teresa Wright tied the knot with Niven Busch in 1942, and their relationship lasted for a decade. They had two children together. In 1959, she got married for the second time to Robert Anderson. They divorced each other in 1978.