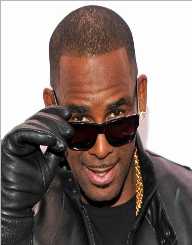 American musician and entertainer R. Kelly was born on the 8 January 1967. He was born to a single mother on the Southside of Chicago and started singing as a way to make money. It has been reported that he was bullied and at one time when he was thirteen years old, someone fired a gun at him.

R. Kelly attended Kenwood Academy High School. He did not graduate and later revealed that he had extreme difficulty learning to read. A music teacher Lena McLin spotted his musical ability, and she encouraged him to sing and perform.

Record executive Wayne Williams of Jive Records heard R. Kelly singing at a backyard barbeque in Chicago, and 1991 R. Kelly signed to Jive Records. This was before Jive Records gained international fame with artists such as NSync and Britney Spears. Kelly’s debut album was as part of the group Public Announcement. His managed was Barry Hankerson. The group’s first release was in January 1992, and it was entitled Born Into the 90s. The album was reasonably well received, but R. Kelly decided to leave the group as he was keen to work as a solo artist. His solo debut album was 12 Play (1993) and hits from this album quickly established Kelly as a serious artist. Hits included Bump N Grind, Sex Me and L Like the Crotch On You. The album stayed at the top of the R&B charts for nine weeks.

During 1994 R. Kelly was put in touch with Aaliyah, (b.1979 – d.2001) an emerging R&B singer. She was the niece of his manager Barry Hankerson. Kelly wrote and produced Aaliyah’s debut album Age Ain’t Nothing But a Number which was successful, containing some hit singles. The album sold a million copies and attained platinum status.

In September 1995 You Are Not Alone by Michael Jackson was co-written and co-produced by Kelly reached number one on the charts. At the end of 1995, Kelly released his second solo album R Kelly which contained three number one hit singles: You Remind Me Of Something, Down Low and I Can’t Sleep Baby. He was included on the Space Jam soundtrack with I Believe I Can Fly. The song reached number 2 on the Billboard singles chart. The album R was released in 1998 and quickly reached number two on the Billboard charts. This album included the hits I Believe I Can Fly, and I’m Your Angel - with Celine Dion. He released the single Heaven; I Need a Hug in 2002, the album Ignition in 2003 as well as Chocolate Factory which was met with critical acclaim. With his next album, he experimented with soul and gospel music Happy People/You Save Me.

In 2004, R. Kelly toured with Jay-Z. Kelly later claimed a member of Jay-Z’s entourage had assaulted him. In 2005, he released Trapped in the Closet and won a new audience via the internet. In 2007 Kelly did a hip-hop album On Double Up. He performed in Africa for the first time in June 2009 when he was asked to appear at the Arise African Fashion Awards in Johannesburg. In November 2009 he released the album Crazy Night, and in 2010 Love Letters, Shut-Up (2011) followed and in 2012 Write Me Back, a sequel to Love Letters. Later albums include Black Panties (2013), The Buffet (2015) and 12 Nights of Christmas (2016)

R. Kelly is considered by Rolling Stone magazine to be one of the most important R&B icons of the 1990s and 2000s. He has won numerous awards.

In 1998, Kelly three Grammys for I Believe I Can Fly (1996). He won Best R&B Song, Best Song Written for a Motion Picture and Best Male R&B Performance.

In June 2010 R. Kelly performed Sign of a Victory at the opening ceremony of the World Cup. He also performed at the Grammy Gala in February 2011, singing a medley of some of his biggest hits. In March 2011 Kelly was honored by Billboard when they named him the number one R&B artist of the last twenty-five years.

After a fight between R. Kelly, members of his entourage and men at a local health club in July 1996, Kelly was arrested on battery charges. He settled the battery case for an undisclosed sum in 1997.

In the late 1990s, allegations of underage sex were made by Tiffany Hawkins. Then videos of sex with underage girls emerged after they were sent anonymously to Sun-Times journalist Jim DeRogatis who handed them to the authorities. The case against Kelly dragged on for years before finally in 2008 Kelly was acquitted because the girl in the video could not be identified. The Hawkins case was settled in 1998.

After various allegations and scandals which included sex tapes which were sold in 2002 and the resignation of his manager in 2000, Jive Records issued a statement saying that Kelly had been with the company for eleven years and that they fully supported him and his music.

In August 1994 R. Kelly married the fifteen-year-old Aaliyah. A falsified Cook County marriage certificate showed her age as eighteen. Her family, including Kelly’s manager Barry Hankerson, were outraged. The couple separated and had no further communication. The marriage was annulled in October 1994. Aaliyah later died in a plane crash in the Bahamas in 2001.

R. Kelly married Andrea Lee in 1996. Lee was a dancer and choreographer from his stage show. The couple had three children together. Two daughters born in 1998 and 2000 respectively and a son was born in 2002. In September 2005, Andrea Lee asked Kelly for a divorce, and this resulted in her applying for an order of protection against him. Lee later had the order rescinded.

Soulacoaster, a memoir, was published in 2012.