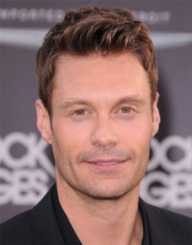 Ryan Seacrest was a person that is destined to be very great in the show business world. He is endowed with an ideal style and talent which made him well known with excellent skills and talent. He is known to have scaled through the ladder to the zenith of success. He is one of the top-rated television hosts in the country.

He is very much good in his chosen field and started his career with asuccess. His reputation sprouts out from his well-polished skills as well as knowledge about the television and show business. Ryan Seacrest later signed a deal to serve as the host for American Idol. His fame kept on increasing till he got a celebrity status. Today, he is one of the country’s best anchor, and he’s praisedfor his work on the American Idol records.

Ryan Seacrest was born in Atlanta Suburb of Dunwoody, Georgia to Constance Marie and Gary Lee Seacrest. He was known to have a great inclination towards showbiz from his early age. He is known to be fancied by people around him and always hung microphone around his hand. His preliminary education in Dunwoody High School where he was the school’s morning announcer. He was always regarded as the Voice of Dunwoody High School.

Ryan Seacrest bagged a coveted internship at WSTR FM in Atlanta with Tom Sullivan. There, he learned little things about the various key function areas of radio. He, however, made his debut after the regular DJ fell sick. He got his first show in his broadcasting career as he had an overnight slot at WSTR. Upon his graduation from Dunwoody High School, he continued at WSTR. He later gained admission to study journalism before he dropped out to continue his full-time career in broadcasting. He later moved to Hollywood.

Being a charming, good looking and fantastic personality with a lot of radio experience, he earned his first place in front of the camera with ESPN. He hosted the Radical Outdoor Challenge as well as the Kid’s show Click in the 1990s. He got a singing competition contract with American Idol. There, he co-hosted the show with Brian Dunkleman. Later, he became the only show. In 2005, he got his lifelong dream fulfilled.

He, however, held this position till 2011 before he signed a deal with American Idol for more seasons. Later in 2012, he helped cover the 2012 Summer Olympics in London as part of his agreement with NBC Universal. He later expanded his reach by hosting a game show on NBC which is entitled The Million Second Quiz.

His achievement as a television presenter cannot be underemphasized his talent and ability were noted by Los Angeles some years back. Ryan Seacrest replaced Rick Dees as the host of Los Angeles Radio Station KIIS’ morning show. The show was named On Air with Ryan Seacrest and is presently covering more than 150 radio stations in North America. He is also the executive producer of the show.

LIFE BEHIND THE SCENE

Ryan Seacrest has created some popular TV programs and has helped propel people like Kim Kardashian and her family with a reality TV fame, Keeping Up the Kardashians.

He later worked with Chief Jamie Oliver Twist to produce Food Revolution. Unsurprisingly, he won an Emmy Award for the show. In 2012, he established a venture, Ryan Seacrest Media with Mark Cuban. His Media House later launched a new pop-culture and entertainment-driven TV channel which was named AXS TV.

Ryan Seacrest is a very good talker as well as a charming personality. He has had affairs with numerous Hollywood women ranging from Renee Hall, Shayna Taylor, Sophie Monk to Teri Hatcher. Ryan Seacrest started a romantic relationship with Julianne Hough in 2010. Hough was a professional actress as well as a singer who was known for her participation in Dancing with the Stars. The relationship ended in 2013.

Like 2009, he was the second highest paid television reality host after signing a deal of $45 million with CKX for American Idol. Ryan Seacrest later signed a two-year contract of $30 million to serve as the host of the same show.