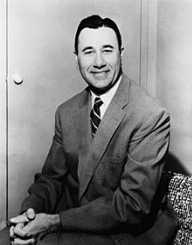 Oral Roberts is widely known as a controversial American preacher and faith healer in the early 20th century. He is ordained in both the United Methodist Church and Pentecostal Church. Due to his preaching, Roberts was recognized as a Charismatic Christian evangelist who started the practice of evangelization on television. He established schools, a hospital, and a massive following from around the world due to his religious zeal.

In 1938, Roberts married Evelyn Lutman, the daughter of a preacher. The couple lived together for 66 years and were blessed with 4 children namely Rebecca, Ronald, Richard, and Roberta. Two of their children died of tragic deaths; their daughter Rebecca died on February 11, 1977, from a plane crash while their son Ronald committed suicide on June 10, 1982, by a gunshot to the heart.

On December 15, 2009, Roberts took his last breath at his home in Newport Beach, California at the age of 91. The cause of his death was due to pneumonia-related complications.

The Poor Child From Oklahoma

Granville Oral Roberts was born as the youngest of five children in Ada, Pontotoc County located in Oklahoma on January 24, 1918. His parents were Ellis Roberts and Claudia Roberts and grew up in an extremely poor household. At the age of 17, he almost died because of contracting tuberculosis.

His father worked as a pastor of which the young Roberts followed suit. Prior to his religious involvement, he studied at Oklahoma Baptist University and Phillips University and graduated with no degree.


The Call Of Faith

Upon graduating from college, he decided to become a faith healer. He served as a pastor in Georgia after resigning his pastorate in Oklahoma in 1945. His pastoral activities in Georgia wherein a reported instance of healing for two people occurred which led Roberts to believe that he was “approaching his hour”.

At the age of 29, he resigned his position at the Pentecostal Holiness Church to establish OREA. His works at OREA included more than 300 crusades that spanned the whole world, faith healing, and evangelical preaching.

The Pioneer Televangelist And Other Establishments

Roberts’ media coverage transcended the radio and television, making him the pioneer evangelist to serve his evangelical teachings on TV and the radio. He started off in 1947 via radio and moved on to television coverage in 1954.

In the course of his life, besides founding OREA, he also established Oral Roberts University in 1963 at Tulsa, the Golden Eagle Broadcasting in 1996 and the City of Faith Medical and Research Center which operated from 1981 to 1989.

The City of Faith’s goal was to merge the power of prayer and medicine as part of its healing process. The hospital closed due to bankruptcy and the rising scandal from fellow televangelists at the time which brought forth the hospital’s closure after an eight-year operation.