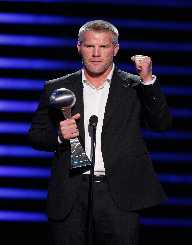 Brett Favre was born in October 1969. His place of birth was in Gulfport, Mississippi in the United States. He was the son of Bonita and Irvin Favre. Both his parents earned a living as teachers. Growing up, the skilled footballer loved playing both football and baseball. His father was his football coach along with his teammates.

Brett Favre studied at Hancock North Central High School. After his high school graduation, he was admitted to the University of Southern Mississippi has received a scholarship. As a freshman, he won in six games out of 10 in the starting position. He later had a serious car accident but luckily recovered fully and continued playing. Subsequently, he graduated from the university with a degree in teaching with a major in special education.

During the 1991 NFL Draft, Brett Favre signed with the Atlanta Falcons. However, he left the team the following year for Green Bay Packers. In the same year, he replaced Don Majkowski who had an injury while playing against Cincinnati Bengals. In the 1992 season, he helped his team to a 9-7 win.

Later in 1995, Brett Favre led the Green Bay Packers to a 11-5 record. The following year, during the Super Bowl XXXI, he once again helped his team emerge victoriously. Winning became a routine for the Packers for the next few years.

In 2003, Brett Favre defeated the Oakland Raiders during a Monday Night Football game. Later in 2007, he also helped the Packers to a win against the Kansas City Chiefs. In the same year, his team also beat the Lions.
In 2011, Favre was forced to retire early from his football career following health issues.

In 1996, Brett Favre tied the knot with Deanna Tynes. The couple is blessed with two daughters. He also has a grandson and is the founder of the Brett Favre Fourward Foundation. Favre is a philanthropist, exhibited by his contributions to many charitable causes, especially in Wisconsin and Mississippi.