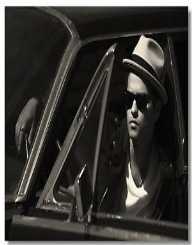 Bruno Mars is a native of Honolulu, Hawaii and was born on 9th October in the year 1985. He was born to a Latin percussionist called Peter Hernandez and Bernadette San Pedro Bayot, who was a dancer and singer. He had five other siblings and was nicknamed Bruno when he was a kid. His birth name was Peter Gene Hernandez

He got exposed to wide genre of music from his early years and got a slant for the stage craft. This was understandable since he had professional performers as parents. He got exposed to Elvis Presley when his uncle played the Elvis impersonation.  He got Bruno to perform when he just three years old.

The early years was the intro to the stage for Bruno as he joined up with his family band and performed in his town. He became popular as his Elvis impersonation also gave him acclaim in his neighborhood.

He did his early years in school at the President Theodore Roosevelt High School and graduated by 2003. His school years performance was with the group known as “The School Boys”.

After he left High school, Bruno moved to the state of California and settled in Los Angeles. He picked up the toga as Bruno Mars in LA.

He also teamed up with Ari Levine and Philip Lawrence to begin the songwriting, record production and creative team called “The Smeezingtons”, sometime in 2009. The foray attained huge popularity with calls from all over the country for their creative signature.

The ASCAP Pop Music Awards in songwriting was awarded to the team in the year 2012 in recognition of their creativity.

The song “Just the Way You Are” debuted in 2010 with the complete album “Doo-Wops & Hooligans” coming out in October of that year. This song ruled the Billboard Hot 100 and was the herald of Bruno to international acclaim. The album also got the best “pop debut” mention for the year.

The worldwide sales for Bruno for his debut album garnered more than11 million albums. In addition, he got 68 million singles on the sales track and this earned him a place in the bestselling artists the world has ever known.

“Unorthodox Jukebox” was his second album and was much-anticipated; hitting the shelves in 2012 and in the month of December 2012. “Locked out of Heaven” was the lead single in the foray and was a Billboard Hot 100 topper for the next 6 weeks after it hit the airwaves. The single ruled the charts in 20 countries across the globe and was without a doubt he commercial success.

His “Moonshine Jungle Tour” took off in 2014 in the month of June. It took off from North America and navigated through Australasia Europe before making a final berth again in North America by October of the same year.

Maybe flowing from his early years as an Elvis impersonator, he also took on slants of the same slant in the years he has been in the limelight. He has done Michael Jackson’s skits and has remained a showman that is worthy of the stage. He is very entertaining and gives the audience a great value for their money.

Bruno Mars has shown that he does not just sing but that he also knows how to keep a live audience happy. He has reprised this countless times across the globe and on several platforms that can’t be ignored.

His extra blend of music comes from his exposure to the variants of R&B, rock, hip hop and reggae in his early years. Like he said in the U.K Daily Record interview in the year 2012, every artiste will be proud to hit the limelight and acclaim of a star like Michael Jackson.

His single "Locked Out of Heaven," was a winner of the MTV Award for Best Music Video. His other song, "When I Was Your Man", also made it to Number 1 on Billboard Hot 100.

The song “Treasure” got the ‘Best Choreography Award’ from MTV in 2013 while he snapped up a Grammy for the album in 2014 for the Best Pop Vocals.

Bruno Mars also hugged the limelight for writing "Wavin' Flag" for K'Naan. The song was the 2010 Vancouver Winter Olympics theme song. He already made a name writing songs for many people and musicians all through the decade to 2010.

His other hits include the 2015 well-received and Grammy –winning song Uptown Funk,

With a musical family at the background, one can safely say that Bruno Mars has lived, breathed and made music all his life.