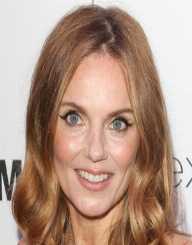 Geri Halliwell is a remarkable pop artist with the third-most number one singles in the UK Chart history. She is well known for her outstanding performances as Ginger Spice and her association with Spice Girls Group. Though she left the group in 1998 and pursued a solo career, she released hit singles such as ‘Scream If You Wanna Go Faster’ and ‘It’s Raining Men.' In 2007 she rejoined the group.

Geri Halliwell is a daughter of parents Laurence Francis Halliwell and Ana Maria born on August 6, 1972, in Watford, England. She grew up in North Watford where she enrolled in Watford Grammer School for Girls and Camden School for Girls. She took several jobs including nightclub dancer in Majorca, Turkish presenter of ‘Let’s Make a Deal’ and a glamour model.

At the age of 19, Halliwell appeared as 'a page three girl' in The Sun Magazine and later took nude photos which got republished by several magazines such as Playboy in 1992 and Penthouse in 1996.

Geri Halliwell alongside Melanie Chisholm, Victoria Beckham, and Melanie Brown formed a group named ‘Spice Girl’ under the heart management and made their first performance in December 1994 at Nomis Studios where they were acclaimed.

However, in March 1995, the group parted ways with the heart management and signed with Simon Fuller of 19 Entertainment. After several performances of their recorded labels in London and Los Angeles, the group signed with Virgin Records. By and large, they released their first single, ‘Wannabe’ in June 1996. This song became a global hit and the bestselling single by a female group. Nine further singles followed in their album, ‘Spice,' ‘Spice world’ and ‘Forever.'

Other successful releases include, ‘Say You’ll Be There,' ‘2 Become 1’, ‘too much’ and ‘Viva Forever.' On May 31, 1998, Halliwell left The Spice Group due to personal differences and depression, and after her exit, the other girls wrote songs about her on their album, ‘Forever Goodbye,' ‘Tell Me Why’ and ‘Let Love Lead the Way.' The girls sold over 75 million albums becoming the bestselling group of all time.

After leaving the group, Geri Halliwell released her solo album; ‘Schizophonic’ with the lead single, ‘Look at Me’ followed by other singles such as ‘Mi Chico Latino,' ‘Lift Me Up’ and ‘Bag It Up’ that emerged number one in UK Singles Chart. Her song ‘Schizophonic’ ranked number 42 on the Billboard 200 and sold three million copies worldwide becoming her bestselling album to date.

'It’s Raining Men’ album ranked number one in the United Kingdom and top ten in over 27 countries emerging her biggest hit to date. The song also won the International Song of the Year Award in 2002 during the NRJ Music Awards.

In 2002, performed alongside Pete Waterman and Louis Walsh in a television series, ‘Popstars: The Rivals’. She made a return to music with a single, ‘Ride It’ that emerged number 4 in the U.K and number one on dance charts. Later on May 30, 2005, she released a new single; ‘Desire’ that reached number 22 on U.K chart list and number one on U.K Dance Charts.

Notably, Geri Halliwell started writing children books, and on April 12, 2007, she signed a deal with Macmillan Children's Books. On August 2012, she reunited with the Spice Girls and performed at the closing ceremony of the Olympic Games in London. During the same year, she played a new track called, ‘Phenomenal Woman’ followed by a performance of ‘half of me’ in 2013.

Geri Halliwell had her first child in May 2006 with Sacha Gervasi as the father. In 2014, she started dating Christian Horner followed by the engagement in November 2014 and marriage on May 15, 2015, at St. Mary’s Church in Woburn. The couple has two children.

In 2000, Geri Halliwell earned her nomination for BRIT Awards for Best British Solo Artist and Best Pop Act. Later in 2002, Halliwell received another nomination at the BRIT Awards for Best Solo Artist and Best British Single for ‘It’s Raining Men,’ and a nomination for NRJ Music Awards for International song of the year. Additionally, she became the bestselling female celebrity for her book, ‘Ugenia Lavender,’ and won an Attitude Awards in 2016.