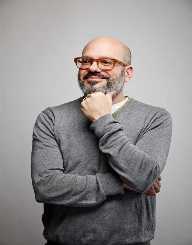 Stand-up comedian David Cross has managed to maintain an averagely low profile while still working in live performances and films. His intelligence and heroic comedy stance is escorted by honesty and everything else that surrounds him. David’s kind of humor gives him a chance to relate his ideas about politics, religion as a well as skirting around any burning issue. His biggest fame came to light when he played the ‘Mr. Show’ film and ‘Arrested Development.' At a glance, his round face and bald head will tell you that Cross is a boring personality. Wait, till he starts to speak and you will end up with doubling humor.

On April 4, 1964, David Cross was born in Atlanta, Georgia, United States. Throughout his teenage life, David likes to socialize with different people. But he also disrespected the authority and later turned out to be a strong atheist believer till today. It was tough for him to live with his Jewish family. After graduating high school, Cross went to Emerson College, but he dropped out after one semester. He had a different kind of life unlike that of his friends. David’s family had a fit lifestyle, but the time came when they didn’t have any means of placing food on their table. This happened after his father; Barry abandoned them. He opted to spend his life in motels and his neighborhood friends. David Cross cemented his life with world ventures including taking drugs and partying.

David Cross wandered from one place to the next in search of his passion. He loved everything that dealt with comedy. As a teenager, David loved to perform stand-up comedies. Afterward, he moved to New York and continued to implement his stand-up comedy performance. To his luck, Cross was given a chance to showcase his skill at ‘Catch Rising Star’ club. There and then he landed his first job and opted to create a group titled ‘Cross Comedy.' He teamed up with other comedians and formalized a new show every week.

In 1995 David stretched out and received a sitcom show known as ‘The Ben Stiller. That is where he met Bob Odenkirk. They tried different auditions without success. In 1995 Bob and David teamed up to form their comedy series known as ‘Mr. Show’. In 1998 they ended their sitcom show. He went ton to create a ‘Tenacious D’ sitcom series. To make it more interesting, Cross used to wear a nun’s attire while appearing in the show. From 1999 to 2003 Cross represented ‘Just Shoot Me!’ Film episode three times. In the end, he managed to receive lots of awards, and positive critics followed along.

In 2010 David launched his comedy series known as ‘the Increasingly Poor Decisions of Todd Margaret.' In the process, Cross landed his voice in comic's shows like ‘Archer’ and ‘Stranger with Candy.' From 1996 to 2010 David appeared in more than ten films. The major films that brought him major success include King Fu Panda in 2011; It's Not Funny in 2004 Bigger and Blackener in 2010 among others.

In 2007 David Cross played a supporting role in ‘Alvin and the Chipmunks’ that garnered him over $200 million in box office alone. Although the film received both negative and positive feedback, Cross managed to work on other exciting projects. David Cross married Amber Tamblyn on October 6; 2012. In 2009 David published his first autobiography titled ‘I Drink for a Reason.'