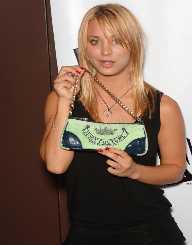 American actress Kaley Cuoco was born on the 30 November 1985 in Camarillo, California to Gary Cuoco and Layne Wingate. She has a younger sister Briana who is also an actress.

Kaley Cuoco started modeling and acting like a child. She appeared in Northern Exposure (1990) Quicksand: No Escape (1992), Ellen (1994), My So-Called Life (1994) and Don’t Forget Your Toothbrush. As well as acting, she also featured in some Barbie Doll commercials.

Kaley Cuoco was homeschooled and received her high school diploma.

In 2013 Kaley Cuoco won the Critics Choice Television Award for Best Supporting Actress in a Comedy Series for her role in The Big Bang Theory. She also won the People’s Choice Award: Favorite Comedic TV Actress award in 2014 and 2015.