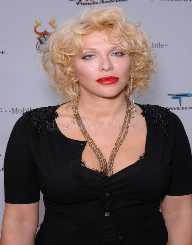 Courtney Love was born 9th July 1964, to Hank and Linda Harrison. She was born in San Francisco, California, United States. Her father was a publisher, as well as the road manager for the group called the Grateful Dead. Courtney Love's parents divorced in 1969. Her mother made accusations against her father that he had administered LSD to Love as a toddler. He denied the accusations, but the damage was done, and his custody bid withdrawn.

Up until that time, Courtney Love had grown up in San Francisco, but she then moved to a country community in Oregon called Marcola with her mother. They lived on the banks of the Mohawk River.

Courtney Love's mother was studying to be a psychologist and completed her degree at the University of Oregon. She had Love in therapy by the age of two. Courtney Love was also subjected to a very alternative upbringing, remembering naked hippies running around their house, and her mother not allowing any gender-specific items such as dresses, or anything that could be depicted as female.

She was adopted by her stepfather at the time, Frank Rodriguez. Rodriguez and her mother had two daughters and adopted a son. Courtney Love was sent to a Montessori school, but she didn’t fit in with the other children, and she had problems from an academic point of view as well.

Courtney Love'smother and Rodriguez divorced in 1972. She remarried, and the family moved to New Zealand. Courtney Love was enrolled at Nelson College for Girls, but was expelled from the school, and packed off back to the U.S. by her mother the following year.

Courtney Love went back to Oregon and was looked after by Rodriguez and other friends of the family. Her mother had two sons during this period. At age 14, Courtney Love had her first brush with the law, being arrested for shoplifting a t-shirt. She was sent to Hillcrest Correctional Facility, and when released, was placed into foster care until she was 16.

At age 16, Courtney Love supported herself by working as a topless dancer in Portland. It was at this time that she adopted ‘Courtney Love’ as her surname so that nobody would know her real identity. To her credit, Courtney Love enrolled at Portland State University and studied English and Philosophy. She also taught herself social skills as she went along. Her adoptive grandparents left Courtney Love a small trust fund in 1981. She used it to visit Dublin, Ireland, where her father was living at the time. While in the UK, she studied Theology for two semesters at Trinity College.

Courtney Love became friends with Julian Cope while she was in the UK. His band was called, The Teardrop Explodes. They were based in Liverpool, and Love lived in his house for a short while. She went to Japan and then Taiwan in 1983, working as an erotic dancer, but the government shut down the club in Taiwan, and she was deported back to the U.S. In the early 1980s, Courtney Love talked the band members of Faith No More into letting her join them as a singer. They did some recordings, but the band was really wanting a male vocal, and so Love was asked to leave.

Courtney Love next formed a band called the Pagan Babies. The band formed in 1984, but disbanded in 1985. Courtney Love thought it might be worth trying acting, so she enrolled at the San Francisco Art Institute and studied film. Her tutor, George Kuchar, cast her in a role for one of his short films, called, Club Vatican.

She managed to get a couple of other small ‘bit’ parts but had to support herself working at a peep show for a period. Courtney Love was cast as the lead in the movie, Straight to Hell, in 1987. Once again, this leads to a couple of smaller parts in other films, but in 1988, Love gave up on her acting career. She returned to Oregon where once again she began working as a stripper, but she was recognized by some of the customers, so moved to Anchorage in Alaska. She lived in Alaska for three months to think about how she was going to move forward with her life. Love supported herself in Alaska by working at a strip club.

Up until this point, Courtney Love couldn’t play any instruments, but she decided to teach herself how to play guitar. At the end of the year in 1988, she moved to Los Angeles and placed an ad to recruit band members so that she could start a new band. Her band was named Hole. She continued working at strip clubs, saving money to buy equipment and a touring van for the group. Their debut single was released in April 1990, called, Retard Girl. It was recorded through an indie label named Sympathy for the Record Industry. This was followed in 1991 with their second single. The band released their first album, and it was well-received amongst the indie and punk rock critics.

At some stage, after their album was released, Courtney Love began dating Kurt Cobain. Cobain was a singer and musician in the band, Nirvana. Love became pregnant, and they married in 1992.

Courtney Love continued to record, and in October 1993, Hole’s second album was released, called, Live Through This. The album was a success, both commercially, and with the critics. The album went platinum in April 1995.

Courtney Love's husband, Cobain, had been found dead in April 1994, having committed suicide. Her first live performance after his death was in August that same year, at the Reading Festival. Her performance received critical acclaim from the reviewers. As the band continued with their tour, although their music was well-received, Love’s behavior was questioned, with offensive rants and outrageous antics. It was evident she was using drugs heavily

It was time for a change, and after the world tour finished in 1996, Courtney Love went back to acting. She won two small roles which got her started, and then her break came when she was awarded one of the starring roles in The People vs. Larry Flynt. She played the part of Flynt’s wife. Courtney Love was nominated for several awards for the part she played.

During this period, Courtney Love also did modelling for Versace. Hole released another album in 1997, is a compilation album. In 1998, they released their third studio album, Celebrity Skin. The album was more mainstream and achieved multi-platinum status. The band finished their tour, and didn’t do anything in the early 2000s, during which time Courtney Love continued her acting. Hole officially announced their disbanding in 2002.

In late 2001, Courtney Love formed a punk band called Bastard, but nothing happened. In 2002, she began writing an album and was signed by Virgin Records. The album, America’s Sweetheart, was released in February 2004. The reviews were mixed, and the album sold less than 100,000 copies. After several charges and legal issues in relation to drugs, Love spent part of 2005 in a rehab facility. She was released in 2006 and wrote her second solo album. In 2009, Courtney Love reunited Hole, and they also released an album shortly after that. The band toured from 2010 through to the end of 2012. At the end of the tour, Love returned to a solo career.

Courtney Love was also very artistic, and she branched out in 2012, debuting a collection of over 40 drawings and paintings that she had created. They comprised of ink, pastels, colored pencils, and watercolors. The collection was shown at Fred Torres Collaborations in New York. She continued to write and perform her music, and took several roles on television, including shows like Sons of Anarchy, Revenge, and Empire.

Courtney Love has not been without controversy. Her onstage behavior after Cobain’s death during Hole’s world tour, is well documented. In July 1995, she assaulted a fellow musician, Kathleen Hanna, by punching her in the face. In Melbourne, Australia, she was arrested after causing disruption to a Qantas Airways flight.

Courtney Love did go through rehab in 1996 and stopped using heroin so she could take her part in the movie, The People vs. Larry Flynt. Multiple testing was done on her during filming to make sure she stayed off the drugs. In 2003, the founder of Virgin Airlines, Sir Richard Branson, banned Courtney Love from using the airline after she disrupted a flight at Heathrow Airport, London.

Later that same year, she was arrested for breaking several windows of her then boyfriend, James Barber’s home, in Los Angeles. She was charged with being under the influence of a controlled substance and lost custody of her daughter because of the incident. Over the next few years, there were more arrests and problems, but in 2007, Love turned to Buddism. She says the practice has kept her sober.

From 2009 to 2014 Courtney Love had to contend with three separate defamation lawsuits. Two of them she settled, but the third was found in her favor.

Courtney Love has been romantically linked in several serious relationships. Her first marriage was in 1989 to James Moreland. He was the singer of. They married in Las Vegas, but the marriage was annulled a few months later. After Hole was formed in 1989, Courtney Love was romantically involved with Eric Erlandson for over a year.

She then married Kurt Cobain, which was her most famous relationship. They married in February 1992 and had a daughter together. Cobain committed suicide in April 1994, while Love was away in rehab.

Courtney Love was linked with the actor Edward Norton between 1996 and 1999.

Courtney Love has taken part in many performances to raise funds for different charities.

These include the Rock Against Rape benefit in Los Angeles in 1993, the RED Campaign at Carnegie Hall in 2009, and Mariska Hargitay's Joyful Heart Foundation even in 2011.

Courtney Love has performed and contributed on several occasions to amfAR’s AIDS research benefits. Another close charity that she has performed at on more than one occasion is for the LGBT youth, particularly the Los Angeles Gay and Lesbian Center.