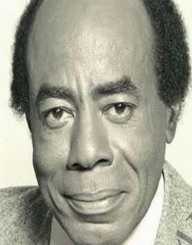 Roscoe Lee Browne was born on May 2, 1922, to Baptist minister Sylvaine Browne and his wife, Lovie Browne. He was the fourth son in their family.

Roscoe Lee Browne attended school and was a good athlete. He was a fast runner of track and field events. Upon his graduating high school, he attended Lincoln University in Pennsylvania. While there he became a proud member of the fraternity Omega Psi Phi. Then in 1946, he graduated the school with his Bachelor’s Degree.

Roscoe was such a good runner that he took the Amateur Athlete title in the 1000-yard run in 1949. In 1951, he won the World Championship in the 800-yard dash. The US entry into WWII happened. As with many other men and women, Roscoe enlisted and joined the fight in Italy with the 92nd Infantry Division. While there, he also organized and ran with the track and field team for exercise and fun. After the end of World War II and an allied victory, Roscoe returned to attend Middlebury College. Following that, it was Columbia University and the University of Florida.

After graduating from college, he started working for Shenly as a sales representative for wine and liquor imports. He did that while he got bit by the acting bug in 1956.

Roscoe Lee Browne was at a dinner party when he told his fellow guests that he wanted to be an actor. So he started out acting in plays for Shakespeare. From there he appeared in numerous plays on and off Broadway. Not only did he act in plays but also in television and film shows.  Some of his credits were as follows: The Connection, Super Fly T.N.T., Jumpin Jack Flash and Legal Eagles.  There were several others as well.

Roscoe Lee Browne also became well known for his speaking voice. He did several movies as a voice only and also was well known for reading and writing poetry. Below find a short list of some of his voice only shows including his radio recordings including but not limited to Logan’s Run, Freakazoid!, and Epic Movie.

Roscoe Brown had a prolific career. But when he wasn’t acting, he needed another source of income. So Roscoe Browne began to teach at Lincoln University of English, French and Comparative Literature. Roscoe taught from the year 1952 to 1982.

Roscoe Lee Browne won some awards for his voice and acting over the years. This included a Daytime Emmy Award in 1995. A few such as “Old Glory” won him an Obie and also a Drama Critics Award for “The Dream on Monkey Mountain." He also won a Drama Critic Award for Joe Turner’s “Come and Gone.”

Roscoe Lee Browne was an outstanding voice actor and also television/film actor. His voice was heard on stage and the radio. He was heard speaking live and recorded and became a very recognized voice. Roscoe is just as recognized as James Earl Jones. Roscoe had a voice people loved to listen too.

Roscoe Lee Browne legacy to others is that of a black man who decided late in life to do something that he wanted. He had already been working for years when he started to act. No one thought that it would have lasted the length that it did. Some of his friends probably thought it was a mid-life crisis. But this man turned that desire into a career that lasted until his death and past.

Roscoe acted in Shakespeare, recited poetry from Robert Frost, voiced cartoon characters and science fiction characters. He also acted regular black folks as well. Although it doesn’t list that he was ever married, he did have a full life full of friends and family. His voice has been recorded for many to hear for years to come. Think before James Earl Jones there was Roscoe Lee Brown.

Of note, there is a scholarship named after the actor called the Roscoe Lee Browne Poet in Residence Award given by the Roscoe Lee Browne Scholarship Fund. It provides money to the Millay Colony of the Arts to help fund the person while they are finishing their project. He died on April 11, 2007, in Los Angeles, California where he resided before his death. At the time of his death, he was not married at the time nor did he have any children.