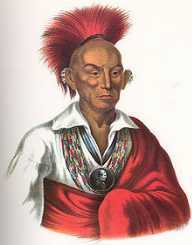 Black Hawk was a warrior and political leader of the Sauk Native American tribe.

Black Hawk was born sometime in the year 1767. His birthplace was the village of Saukenuk along the Rock River, located in modern-day Illinois. His Sauk name was Ma-kat-tai-me-she-Kia-kiak, meaning ‘large black hawk’. His father, Pyesa, was the medicine man of the tribe.

Black Hawk began to take part in raids at a young age. He killed his first enemy when he was 15 years old. As he got older, he earned a reputation as a great warrior. He frequently fought against the Osage, the Cherokee, and many other tribes. He eventually became the war leader of the Sauk band. He joined the War of 1812, fighting on the side of the British. He fought in a number of crucial battles. He managed to earn the rank of brevet Brigadier General.

In the late 1820s, the Sauk tribe started to lose its land. In April 1832, Black Hawk started a war against Illinois and Michigan territory. He formed the British Band, a group of more than a thousand Native Americans from several different tribes. He hoped to also receive support from the British forces. The war included many battles, raids, and massacres. It culminated in August 1832 with the Battle of Bad Axe. The American soldiers killed hundreds of Indians. Black Hawk ultimately surrendered himself to the U. S. authorities.

After the war, Black Hawk ended up in prison together with a few other Indian leaders. A few months later, they were all taken on a tour. They were displayed publicly in many cities, attracting large crowds. The tour was an order from President Andrew Jackson, who wanted to show the power of the United States. During this time, Black Hawk told his life story to a government interpreter. His autobiography was soon after published in Ohio. Black Hawk was released from prison by the end of 1833.

Black Hawk’s wife was As-she-we-qua, also known as Singing Bird. They had two sons, named Gamesett and Nasheakusk, and a daughter named Namequa. They had a few other children who died at a very young age.

Black Hawk became ill and passed away on October 3, 1838. He was buried on a friend’s farm near the Des Moines River. A year later, his remains were stolen by a man who wanted to exhibit his skeleton. Black Hawk’s sons asked Governor Robert Lucas for help. He arranged for the remains to be transported to the Burlington Geological and Historical Society. The building burned down in 1855, destroying everything inside. There is speculation that some of Black Hawk’s remains are still buried at the Iowaville Cemetery.

A number of sports teams and schools were named Black Hawk. A military helicopter and four U.S. Navy Vessels also carry his name. Black Hawk County is a large area in northeastern Iowa. The Black Hawk Statue is a statue located in the city of Oregon, Illinois.