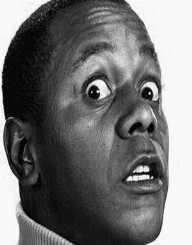 Flip Wilson was a comedian, actor, and writer of African American descent.

Clerow "Flip" Wilson Jr. was born on 8 December 1933 in Jersey City, New Jersey. His parents Clerow Sr. and Cornelia had ten children, and his mother abandoned the family when he was seven years old.

Flip and his siblings were fostered as Clerow Sr. was unable to look after them alone.

Flip Wilson was unhappy in foster homes and went to reformatory school, where his brother was. Flip escaped eight times before returning to his father at the age of thirteen. Although he excelled at school, he did not continue due to an embarrassment of his appearance during eighth grade.

When Flip Wilson was sixteen, he lied about his age to join the United States Air Force, where he gained the nickname Flip for his jokes. It was there that he was encouraged by his commanding officer to study and take the typing course.

Flip Wilson began to write his comedy there. After four years, he was discharged from duty in 1954.

Flip Wilson worked at Manor Plaza Hotel in San Francisco as a bellhop in 1954, where he convinced the manager to let him perform a comedy skit between dance acts at the nightclub. It was a success, for the next eight years, he played a drunken patron in between regularly scheduled acts throughout black clubs and theatres in California.

In the mid-1960s, Flip Wilson scored performing time as comic and master of ceremonies at the Apollo Theater in Harlem. While working in New York, Flip was endorsed by Red Foxx and was invited onto

The Tonight Show Starring Johnny Carson. His performance was famous, and he became a regular. Flip also gained airtime on Rowan and Martin's Laugh-In, The Ed Sullivan Show and many more. In 1968, he had a television special, and by 1970 his variety shows The Flip Wilson Show was launched.

Despite racial tensions and riots, Flip furthered his career by appearing in three films, and four comedy albums. After in 1974,

The Flip Wilson Show ended at a high rating. Flip then focused on doing guest appearances, although he still acted and appeared in television movies. He co-starred in Uptown Saturday Night with Bill Cosby.

In 1981, Flip Wilson was arrested and charged with possession of cocaine, and was subsequently dropped from 7- Up’s advertising campaigned. After a brief absence, he hosted a few shows on television starting 1984.

Flip Wilson hosted People Are Funny and Charlie and Company with Gladys Knight.  He seldom appeared on shows after that, as there were rumors of drug abuse.

Flip started Little David Record label in 1969, which focused mainly on comedy albums,  jazz, and soft rock. The label was sold to George Carlin in 1980s.

You Devil You won a Grammy Award for Best Comedy Recording in 1968. He won two Emmy Awards and a Golden Globe for Flip Wilson Show. The Devil Made Me Buy This Dress won Grammy in 1970

Flip Wilson married Lavenia Dean in 1957, and they divorced ten years later without any children. He married Tuanchai “Cookie” MacKenzie in 1979, and have one child together. The couple divorced in 1984. He also had a de facto partner Blonell Pitman and stepdaughter Michelle.

Flip Wilson won custody of all his children in 1979 and took fewer jobs to spend time with his children: Kevin, David, Stacy, Tamara, and Michelle.

In September 1998, Flip Wilson removed a cancerous tumor near his liver via surgery. But two months later on 25 November, Flip Wilson passed away of liver cancer in his home in Malibu, California. He was cremated.