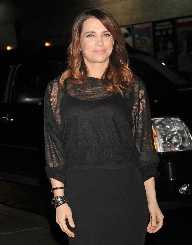 Kristen Wiig was born 22nd August in the year 1973 in the New York district of Canandaigua. The family relocated to Pennsylvania and settled in Lancaster when she was three years old. Her parents split when she was nine years old, and she after that moved in with her mother along with her older brother. Wiig was reputed to have a massive sense of humor as a youngster. At a time, she would carry the empty guitar case belonging to her father around the neighborhood. She was portraying that she could play the guitar.

Kristen attended Brighton High School in Rochester and later moved on to the University of Arizona for college. She enrolled for her first class in acting here in the university. It is a mix of irony that she used to avoid public speaking but ended up as an actress and performer. Kristen alluded to the classes she took and the huge encouragement she got from her teachers, who prodded her on. For her, this played a big role and made a massive impact on her taking to the stage.

Kristen Wiig dropped out of school and relocated to LA as she set her eyes on pursuing her dreams. She initially had to sell fruits, work in catering and other jobs to make a living while hunting for acting roles. Eventually, a colleague of hers hinted her about the auditions for The Groundlings and took her along. The audition was for a stage comedy which was coming up at the theatre. She was successful and joined the Empty Stage Comedy Theatre.

Wiig’s first TV role was in the year 2003, and she was on set for The Joe Schmo Show. This character was in a satire setting for reality television. It was around this period that she was propped by her manager to try it out at the auditions for SNL. Saturday Night Live was big, and she joined the crew in 2005 for the 31st season.

Kristen Wiig made the film debut on the set of Unaccompanied Minors, and followed it up with Walk Hard and Knocked Up, in succession. She was there once more in Forgetting Sarah Marshall, in a minor but credited role. She showed up in Ghost Promo and Pretty Bird as 2008 wound up. Whip It, and Adventureland were next in line. Her role in ‘Ice Age: Dawn of the Dinosaurs’ was for voice-overs. Kristen was up again by 2010 on the set of Despicable Me, where she had her voice in use. She reprised this role in How to Train Your Dragon.

By 2010, Kristen was in the big league with a lead role in ‘Paul.’ This was her first major role before starring in Bridesmaids. She co-wrote the script and was released under the Universal Pictures platform. This was a box office hit and gave her critical acclaim. Kristen Wiig ended her SNL stint in 2012, and this was in the 37th season. She played a hostess role for the show in 2013 and was on set a guest in October 2014. In 2014, she was on the set of ‘The Diary of a Teenage Girl’ as well as ‘The Martian’ in 2015. She also took up a role in Nasty Baby in the same year. Her 2016 releases included Sausage Party, Zoolander 2 and Ghostbusters.

Life In The Limelight

Limelight for Kristen Wiig can be traced from her SNL role, and it was an essential platform that enabled her bond with her audience. She gained popularity and accumulated fans as a result.

Kristen got a mention in the 2012 listing of The 100 Most Influential People in the World by Times Magazine. She got nominated on a yearly basis from 2009 to 2012 for Emmy Awards in the category of ‘Outstanding Supporting Actress in a Comedy Series.’ Her nominations history also includes that of the Academy Awards for Best Writing - Original Screenplay in 2011 for her in the film – Bridesmaids.

Kristen Wiig’s ancestral heritage includes an Irish tree from her paternal tracing as well as Norwegian hints. On her mother’s ancestry, she is both Scottish and English. She comes across as a shy person but has managed to pull the stunts since childhood.

Wiig also has interests in painting and drawing, but she never dared to make her mark. On this score, she left her skills dormant and unproven. She is publicity–shy and has no social media account. She rather lives her life away from the glare of the public. She is a supporter of the animal cause with PETA and got a mention as one of the Sexiest Vegetarian Celebrities according to PETA, in the year 2011.

Kristen Wiig was married in 2005 to the comedian and actor, Hayes Hargrove. The relationship ended in the year 2009.