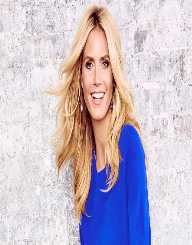 German-American model Heidi Klum was born on June 1, 1973, in Bergisch Gladbach, a town just outside Cologne, Germany. Her mother was a hairdresser, but her father, a cosmetics company executive.

In 1992, Klum, convinced by her friend, enrolled in a modeling contest. She was voted the winner out of 25,000 contestants, which secured her a US $ 300,000 contract with Metropolitan Models New York. She accepted the offer a few months later when she graduated from school.

Since Heidi Klum started out as a model, she has been featured in French, German, Portuguese and Spanish Vogue covers and various other fashion magazines all over the world. She became widely known, after appearing on the cover of Sports Illustrated. Klum is also one of the Victoria’s Secret Angels and has hosted their fashion shows four times. She left Victoria’s Secret in 2010.

Since 1997 until 2010, Klum has been the object and subject of Joanne Gair’s body painting work. She is also the celebrity spokesperson for Volkswagen and Jordache, as well as H&M, Braun, and Dannon.

Besides her modeling, Klum has also appeared in various on-screen projects. She appeared on Sex and The City, How I Met Your Mother and the movie Blow Diary. Klum made cameo appearances in The Devil Wears Prada and Perfect Stranger. Klum has been listed as one of the Top 15 highest earning models by Forbes magazine. In 2011, her income was estimated around $ 20 million a year, second to Gisele Bundchen.

In 2011, Klum signed a deal with New Balance and Amazon.com, to launch a clothing line. She also signed a deal to host a show on Lifetime, called Seriously Funny Kids. Several fashion designers have long stated that Klum has always been more of a businesswoman than a model. For example, Karl Lagerfeld commented that she is no runway model and has too big of a bust. Klum, as well as Claudia Schiffer, have never worked in Paris.

One of the most successful TV projects for Klum has been Project Runway US. She started to host the show in 2004. In the show, fashion designers compete for the opportunity to show their line at the New York Fashion Week. For the show, Klum received an Emmy Award nomination four seasons in a row. Klum has also been the host and judge on Germany’s Next Top Model. In 2013, Klum and her co-host Tim Gunn finally won the Emmy Award for Outstanding Host for a Reality or Reality-Competition Program.

Klum has tried out her talents in clothe designing. She designed several clothing lines, including one for men, for the German mail-order catalog Otto. She has also designed shoes for Birkenstock as well as jewelry, swimsuits, and lingerie. Klum also has two fragrances named “Heidi Klum” and “Me.”

On the 50th birthday of The Barbie, Klum became Barbie’s ambassador and had a doll made for her. In 2010, Klum launched two maternity clothing lines. To promote her lingerie line, Klum appeared in Australian singers Sia music video Fire Meet Gasoline.

Heidi Klum is a woman of many talents. Besides her wide business ventures, she is also a painter. Her work has appeared in several art magazines in the US and Germany. She also co-authored the book Heidi Klum’s Body of Knowledge- a book about her biography and advice on how to become successful.

Klum’s first marriage was in 1997 to the stylist Ric Pipino. The marriage lasted until 2002. Soon after her marriage broke off, Klum started dating Renault Formula One Italian managing director Flavio Briatore. In 2003, she announced her pregnancy, but the couple split. She began dating musician Seal and gave birth to her daughter Helene. She has stated on various occasions that Seal is her daughter’s father and Briatore is not involved in her life.

In 2004, Klum and Seal got engaged and married in 2005. They have three children together. In 2009, Klum adopted Seals surname and became known as Heidi Samuel. In 2012, the couple announced their separation and divorced three months later.

Klum is an animal rights activist and a philanthropist. In 2011, she led the Walk For Kids to raise funds for Children’s Hospital Los Angeles. She was awarded Crystal Cross Award by the American Red Cross for her charity work.