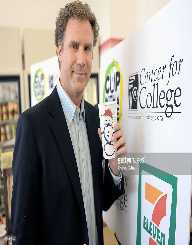 Will Ferrell was born on July 16th in 1967. He was born in Irvine, California. He is a renowned American actor, comedian, and a producer. He is also famous for his unique writing prowess. His career turning point came about when he featured a cast in the Sunday Night Live during the 90s. With success he achieved from the show, this landed him a spot in ensuring that he starred in several films with the likes of Step Brothers, Megamind, and The Lego Movie.

John W. Ferrell was born on July 16th in 1967. He is the oldest son of Lee Ferrell and Kay Ferrell. His father, born in 1941, he was a professional musician back in the day. He used to play with the Righteous Brothers. Ferrell’s younger brother is called Patrick. When Ferrell was only eight years old, his parents separated. Nonetheless, both of them did an important part in raising their son. As a result, young Ferrell never faced any difficulties arising from the unsuccessful marriage. Years later, Ferrell joined the University High School where he used to be quite active in sports. It was at this stage of his life that he realized he could make people laugh. He used to bang his head on the wall just to make his classmates laugh.

For his higher education, he enrolled at University of Southern California where he graduated with a degree in Sports Broadcasting.

Immediately after his graduation, Ferrell began working with the NBC television. This time he was not working on the Sunday Night Live Show. Surprisingly, he worked as an intern just moments after graduating from the university. Shortly after his internship program, Ferrell realized that he could work on his comedic career. He enrolled in acting classes as a result.

With time Ferrell began working with The Groundlings which was an L.A improve troupe credited for producing several SNL cast members such as Chris Kattan, Maya Rudolph, and Laraine Newman. At this point, Ferrell perfected his impersonation skills which made him famous. This made him land several TV breaks and began featuring as a guest actor on sitcoms, for instance, Grace Under Fire and Living Single.

In due course, Ferrell found his career breakthrough while still working with The Groundlings. The early 1990s, Lorne Michaels, the founder of SNL was impressed by his talents during his talent search for fresh talent.

In 1995, Will Ferrell officially became a member of the Sunday Night Live. This was at a time when SNL had declined in popularity from 1994 to 1995. Ferrell featured on the show for the next seven years before leaving in 2002. His impersonation skills earned him fame during his seven-year tenure with the SNL.

Working with SNL was an opportunity that made Ferrell an important figure in the film industry. He went ahead and featured in movies such as Austin Powers: International Man of Mystery- 1997, Superstar-1999, The Ladies Man-2000 and Zoolander-2001.

After a successful career with the Sunday Night Live, Ferrell left in 2002 and began focusing more on his film career. A year later, he landed a leading role in the 2003 movie Old School. His comedic personality in the movie earned him a nomination at MTV Movie Awards. The same year, he received the same nomination award for his role in the movie Elf-2003. Other film hits followed after this including Talladega Nights: The Ballad of Ricky Bobby-2006, Blades of Glory-2007, Step Brothers-2008 and many more.

In 2002, Will Ferrell wedded Viveca Paulin who was his longtime lover and girlfriend. Together they have three sons.