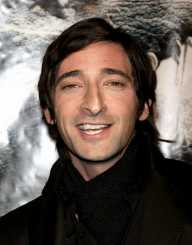 Adrien Brody is an American actor famous for his portrayal of W?adys?aw Szpilman in the movie The Pianist (2002). The 43-year-old actor has appeared in 53 films, two music videos, and has had 8 TV appearances. He currently lives in Los Angeles, California.

Adrien Brody was born in Queens, New York on April 14, 1973. His father, Elliot Brody, is a professor and painter of Polish descent. His mother, Sylvia Plachy, is a Hungarian photographer who has worked for notorious publications like the NY Times.

When he was younger, he used to perform as a magician at children’s parties and attended acting lessons. He studied at Fiorello H. LaGuardia High School of Music & Art and Performing Arts. When he was 13, he appeared in an Off-Broadway play and a TV film. Brody attended Stony Brook University and transferred in 1990 to Queens College.

In his early twenties, Adrien Brody appeared in several movies, including Bullet (1996) alongside Tupac Shakur and Mickey Rourke, and Restaurant (1998). But it wasn’t until he starred in The Pianist (2002) that he gained fame. The movie is set in the years of the German invasion of Poland during World War II. Brody appears as W?adys?aw Szpilman, a Polish Jewish pianist who has to go into hiding from the Nazis.

Brody earned a reputation for taking his work seriously with this role, losing 13 kg and becoming skilled enough playing the piano to be able to interpret Chopin. In 2003 he won the Academy Award for Best Actor, becoming the youngest actor to receive the award. He was 29 years old. This role also earned him a César Award.

Following this iconic performance, Adrien Brody continued appearing in films and on TV. He starred as a ventriloquist in Dummy (2003). For this role, he learned ventriloquism from a professional. He became so skilled that he performed all the voice tricks himself while filming. He also appeared in The Village (2004), and in the 2005 remake of King Kong. His TV appearances include a hosting episode on Saturday Night Live (2003), and the character Harry Houdini in the TV miniseries Houdini (2014).

More recently, he appeared in The Budapest Hotel (2014), and Dragon Blade (2015). The movie Emperor, in which he plays King Charles V, is set to be released in 2017. Apart from films and TV shows, he has also appeared in several commercials, and in 2012 was a runway model for the Prada Men Fall/Winter 2012 show.

The actor also has an interest in film production. He has produced several films, including Giallo (2009) and Manhattan Night (2015), in which he starred.