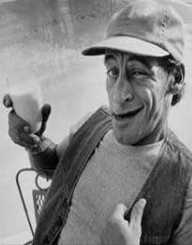 Jim Varney was born on June 15, 1949, in Lexington, Kentucky, USA. His parents were Nancy Howard and James Varney Sr.

Jim Varney attended Lafayette High School. While there, he was in the drama club, and often performed in school plays. Varney’s acting “career” had not begun in high school, though. He had been acting in plays since elementary school. However, it was in high school that his real talent began to show. He acted in many of his hometown’s local plays, ranging from comedies to Shakespearean plays. As a teenager, Varney even had a stint acting in plays in New York, working in clubs and off-Broadway play productions.

Jim Varney later went on to study at Murray State University. He continued to practice acting while he was in school.

By the 1980’s Varney’s reputation of being a funny-man preceded him. There was one character that summed up Varney’s career in the 1980’s: Ernest P. Worrell. This character was first created in 1980 as an advertising character for the Coca-Cola company. The funny character reached audiences so well that he got videos and shows for himself. Just playing this character alone, Varney was in Ernest Goes to Camp, Ernest Saves Christmas, and Hey, Vern, It’s Ernest! Other films he was in during this decade include The Rousters and Fast Food.

Both Varney’s and Ernest’s legacies continued in the 1990’s. Some of the films Jim Varney played Ernest in include Ernest Goes to Jail, Ernest Goes to School, and Ernest Goes to Africa. He also acted in several other comedies, including The Beverly Hillbillies. It was in this decade that he had a few voice acting roles, one of the most recognizable being the slinky dog in Toy Story. Other voice roles included Cooder on The Simpsons, Ephialtes in the Hercules television show, and Jebidiah Farnsworth in Atlantis: The Lost Empire.

Jim Varney continued to act and voice act until his death in 2000. Once film, Daddy and Them, was released a year after his death.

Even though Jim Varney had a long acting career, he did not win many awards. The one award he did win the was Daytime Emmy award for Outstanding Performer in a Children’s Series for Hey, Vern, It’s Ernest! in 1988. He was also nominated for a Razzie award, a joke award for bad films, but he did not win.

Jim Varney was married twice. He was first married to Jacqueline Drew in 1977. However, this couple later broke up in 1983. He remarried a few years later. He divorced from his second wife, Jane Varnet, in 1991. He had no children.

Jim Varney died on February 10, 2000, in Nashville, Tennessee, USA. The cause of his death was lung cancer. He was 50 years old when he passed away.