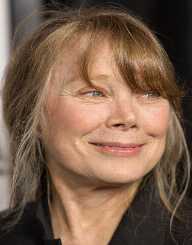 Academy Award-winning American actress Mary Elizabeth Spacek, commonly known as Sissy Spacek, was born on December 25, 1949, in Quitman, Texas, United States of America. Her two elder brothers affectionately used to call her Sissy. Later, the same name was used during her stage appearances, and the name became an integral part of her professional career. Her mother Virginia Frances hailed from a mixed heritage of Polish, English and Irish ancestry.

Her father Edwin Arnold Spacek was engaged as a county agricultural agent. Sissy grew up in a very small city in Texas and attended the local Quitman High School. A bubbly young girl, Sissy Spacek participated in a local talent show, making her maiden stage appearance singing and dancing at the tender age of six. She was named the homecoming queen while studying in her senior prom.

In 1967, Sissy’s immediate elder brother Robbie died due to leukemia. The incident completely devastated her to such an extent that she used to refer to the incident as the most defining moment of her whole life.

The profound shock and grief she experienced from the unfortunate event so early in her life made her strong and fearless in her approach towards life particularly in pursuing her acting career.

Sissy Spacek moved to New York City upon completion of her high school education to pursue her dream career of becoming a professional singer. She stayed there with her cousin, actor Rip Torn and his wife, actress Geraldine Page.

With the help of this actor couple, she was able to enter in Lee Strasberg's Actors Studio and then the Lee Strasberg Institute in New York to study acting. She shelved her intention to become a professional singer after recording an original single under a pseudonym ‘Rainbo’ titled ‘John, You’ve Gone Too Far This Time’. The single was a total commercial failure.

In 1970, Sissy Spacek found a work of an extra in a film called ‘Trash’. The work was secured with the help of her actor brother and his actress wife. She had to wait for another two years before making her debut in a film, where her name got duly credited.

In 1972, she played the role of a girl named Poppy, who was sold into sexual slavery, in a film titled ‘Prime Cut.’ Her bold portrayal of the character led her to get some more work in television including guest appearances in ‘American Style,’ ‘The Waltons’ and ‘Love.’

Sissy Spacek attracted international notice after having starred in Terrence Malick’s ‘Badlands’, a 1973 film where she played the role of the narrator of the film describing her teenage character Molly’s hostile relationship struggle with her serial killer boyfriend Kit, being played in the film by Martin Sheen. Her brilliant performance in the film received rich accolades from all quarters. The film also catapulted her to international recognition. According to Sissy, working in Badlands and portraying such an intricate character is the most incredible experience of her career.

After the high of ‘Badlands’, Sissy appeared in a television film called ‘The Migrants’ and also played the title role in a short comedy film titled ‘Ginger in the Morning’. Her breakthrough moment came when she landed a role in Brian De Palma’s classic movie, ‘Carrie’ (1976).

In this film, she played the title role of a mentally disturbed, shy, troubled high school senior gifted with a weird power of Psychokinesis. Her performance in the film earned her the first Academy Award nomination for Best Actress and propelled her to instant international stardom.

The huge success of ‘Carrie’ led her to receive several substantial roles in different films. She proved her versatility is portraying different shade of characters in films such as ‘Welcome to LA’ (1976), ‘3 Women’ (1977) and ‘Heart Beat’ (1979). In 1980, she again got an opportunity to be part of a cult movie when she was cast in the title role of a biopic depicting the life of the country singer Loretta Lynn in the 1980 movie ‘Coal Miner’s Daughter’.

As she was an accomplished singer herself, she insisted to playback the songs of her character herself and was quite successful in her dual role of the lead actress-cum-singer.

Her phenomenal acting in this film earned her first Academy Award for Best Actress (1980) and also a nomination for a Grammy for the wonderful soundtrack of the film.

In 1981, Sissy Spacek played the lead role in her husband, Jack Fisk’s first directorial venture ‘Raggedy Man’ and followed it with another film in 1982, ‘Missing’, a political thriller by Constantin Costa Gavras.

Her outstanding performance in ‘Missing’ led her to earn a nomination for a BAFTA, a Golden Globe and an Academy Award. Her brilliant success story continued in her next two films, ‘The River’ (1984) and ‘Crimes of Heart’ (1986) for which she earned another two Academy Award nominations.

During the next decade of the 1990s, her film appearances declined steadily which was more than compensated by her increasing number of television appearances. She played a variety of characters in a few films in this decade. Prominent among them are Oliver Stone’s ‘JFK’ (1991), Paul Schrader’s ‘Affliction’ (1997), David Lynch’s ‘The Straight Story’ (1999) and ‘The Long Walk Home’ (1990). Her prominent television projects during this decade include ‘If These Walls Could Talk’ (1996), ‘Affliction’ (1997) and ‘A Private Matter’ (1994).

Sissy Spacek won her sixth Academy Award nomination for Best Actress for her performance in Todd Field's ‘In the Bedroom’ (2001). She followed her success starring in films like ‘Big Love’ (2008), ‘Nine Lives’ (2005) and ‘Pictures of Hollis Woods’ (2007).

She won the Screen Actors Guild Award as an ensemble cast for her performance in the film ‘The Help’ (2011). She was recently seen as a part of a TV series ‘Bloodline’ in its final and third season in 2017.

Sissy Spacek married Jack Fisk, art director and production designer in 1974, whom she met at the sets of Badlands. They together have two daughters, Schuyler and Madison Fisk born in 1982 and 1988 respectively.

Sissy Spacek is the latest and 8th entrant in the list of actresses who have been nominated for at least 6 Academy Awards. She at present lives in a farmhouse near Charlottesville, Virginia along with her family.