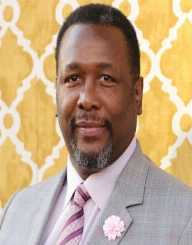 Wendell Pierce is an American television and film actor, known for his ability to play unrelated roles on the script.

Wendell Edward Pierce was born on December 8, 1963, in New Orleans. He grew up in a middle income earning neighborhood of Pontchartrain Park. His father and other black WWII veterans formed the predominantly black neighborhood after the war.

He studied simultaneously in two institutions. He attended Benjamin Franklin High School during the morning. In the afternoons, he studied at the New Orleans Center for Creative Arts. He graduated from both institutions in 1981. After high school, Pierce enrolled at the Juilliard School in 1981. In 1985 he graduated with a degree in Fine Arts with a major in Drama.

He started his acting career in 1986. He got his first role on the screen in the film The Money Pit. In the film, he played the role of a minor supporting role of a paramedic. He continued getting supporting roles in other major films in Hollywood. In 1989, he acted in the film Family Business. Three years later, Pierce got a role in A Rage In Harlem. It was followed by a cast in the film Malcolm X alongside Denzel Washington in 1992. In 1990, he got his first major continuous role in the television series Capitol News.

In 2002 he starred in television series The Wire. He played the role of Detective Moreland in all the five seasons of the production.

He got another role in the television drama Treme. In the series which debuted in 2010, Pierce got to blend in a familiar environment. Treme was cast in the backdrop of New Orleans after Hurricane Katrina. He played the role of jazz musician Antoine Batiste in the communities trying to rebuild their community.

In 2012 he got another role as Joe in the film Four. The film was released to the public in September 2013. Pierce got a nomination slot for his depiction of Joe, a young family man who lives a secret gay life. He featured in the Michael J. Fox show which debuted in 2013 on NBC.

Pierce starred in another film later that year titled The Twilight Saga: Breaking Dawn-Part 2. Pierce played the role of J. Jenks. In 2014 he cast in the film Elsa & Fred. In the fall of 2014, he cast in the civil rights movement film Selma. He played the role of activist and minister Hosea Williams. In 2015 he appeared on the sitcom The Odd Couple, which was based on the 1960s novel.

In 2016 he played Coach Calhoun in the television production Grease. He later starred in the movie Confirmation. In the movie, Pierce starred as the young Clarence Thomas. Thomas was a real-life courtroom judge who became a judge in the US Supreme Court.

Pierce worked in the radio industry as he participated in the film world. He debuted as a radio producer in 2007 with the show Radio Golf. In 2009, he anchored the radio show Jazz at Lincoln Center. He won a Peabody Award for the production. He took a break from the radio industry to concentrate on film acting.

On the theater stage, Pierce performed on several occasions. He appeared on the Broadway productions the Piano Lesson and Serious Money in 1987. His other theater appearances include Waiting for Godot, and Broke-ology. In 2012, he led the production of the Tony Award-winning theater play Clybourne Park. The play was staged at the Broadway Theater in New York. Pierce did another stage appearance in 2016 with Billie Holiday Theater in New York. He cast in the play Brothers from the Bottom.

As a musician, Pierce has not made any significant inroads yet. In 2016, he featured in some albums produced by New Orleans artists. He featured and recorded a song in the album Make America Great Again by Delfayeo Marsalis. He appeared in the album A Beautiful world by Kermit Ruffins.

Pierce is not married. He shuttles between his work and homes in New York, Los Angeles, and New Orleans. In the social world, he is an ardent supporter of his childhood team New Orleans Saints American football team.

On politics, he is a Democratic sympathizer. He campaigned for Barack Obama in 2012 and 2016. He supported Hillary Clinton over Bernie Sanders during the Democrats primaries in 2016. He had a brush with the law over politics. On May 15, 2016, he was arrested for allegedly beating up a female Sanders supporter. He supports initiatives associated by the Clinton Foundation.

Pierce is a business person with multiple interests. He supports charitable organizations in New Orleans. In the reconstruction efforts after the hurricane Katrina, Pierce founded Pontchartrain Park Community Development Corporation. The organization helped in the distribution of affordable solar energy in reconstructed homes.

In 2012 he started a grocery chain in New Orleans to provide fresh and nutritious organic farm food to the community. He partnered with two other friends to create the Sterling Farms food and groceries chain. He appreciated Michele Obama’s efforts to sensitize the American public on the dangers of relying on processed food.