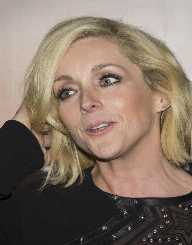 Jane Krakowski was born 11th October 1968, to Ed and Barbara Krajkowski. She was born in Parsippany-Troy Hills, New Jersey, in the United States. Her father is a chemical engineer, her mother works as a theater instructor for a college, and she is also an artistic director for the Women’s Theater Company. Jane Krakowski also has an older brother.

Krakowski learned ballet from the age of four but later changed to dancing for Broadway.

Krakowski studied at the Professional Children’s School in New York City, and then went on to Rutgers University in New Brunswick.

Due to her mother being so involved in the theater scene, it was quite natural that Jane Krakowski would grow up in the entertainment environment.

Krakowski works across the mediums of television, film, and the theater. Not only is she an actress, but she is a trained singer as well.

In 1983, Krakowski made her movie debut in National Lampoon’s Vacation. Krakowski followed this up in 1984 by landing a role in the soap opera, Search for Tomorrow. Krakowski was in the role until 1986 when the show finished.

Her next major television role was in the comedy series, 30 Rock. Krakowski landed the role in 2006, and was in 128 episodes, finishing in 2013. Krakowski was awarded a role in the television series Unbreakable Kimmy Schmidt, which is broadcast on Netflix. Krakowski is still in the role at the time of writing.

With her theater, Krakowski has been in 11 productions. Six of them were Broadway productions, including Company (1995) and Once Upon a Mattress (1996).

Krakowski has also recorded in the studio. She released a solo album in 2010 called Laziest Gal in Town. Krakowski has also been on at least ten compilation albums, usually recordings of the different productions she was performing in.

Jane Krakowski has been nominated for 33 awards, and she has won 10 of them. Her wins include two Screen Actors Guild Awards, two Tony Awards, and two Drama Desk Awards.

In 2009, Jane Krakowski became engaged to Robert Godley. The couple had a son, Bennett, but they separated in 2013.