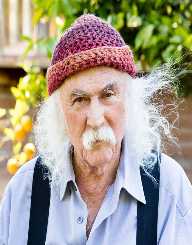 David Van Cortlandt Crosby was born 14th August 1941, to Floyd Crosby and Aliph Van Cortlandt Whitehead. He was born in Los Angeles, California, in the United States. Crosby has an older brother, and his father was a cinematographer.

He studied at several schools, but he wasn't very academic. Crosby finished his secondary schooling by correspondence.

Crosby started to study at Santa Barbara City College, but he dropped out to concentrate on a music career.

Around 1962, Crosby teamed up a black singer named Terry Callier. They relocated to New York City looking for a recording contract, but they weren't successful.

In 1964, Crosby returned to Chicago. Callier introduced him to an instrumentalist called Jim McGuinn. McGuinn was performing with Gene Clark and Michael Clarke. Chris Hillman joined them, and they became known as The Byrds.

The band recorded Bob Dylan's song, Mr. Tambourine Man, and it became a massive hit for them. The song was their first number one on the charts. The band continued to write and record over the next three years.

Clark left the group during this period, and the other members began to tire of Crosby's political outbursts.

When he left The Byrds, Crosby met Stephen Stills. Graham Nash then joined them after leaving the highly successful group called the Hollies.

They released their debut album together in 1969. It was called Crosby, Stills & Nash, and was hugely successful. That same year, Neil Young joined the group as well.

In 1973, Crosby got back together with the other members of The Byrds. They recorded an album that did well. The album hit number 20 in the charts, but it was the last time they would record together.

Crosby, Stills, Nash & Young reformed in 1973 as well, but they were unsuccessful with their recording. In 1974, though, they undertook a very successful tour of the U.S.

They tried again to record an album, but there was still constant niggling and arguing among the group. They canceled the album due to the fighting.

In 1985, the group performed together for Live Aid. They then played together throughout the 1980s and 1990s.

Crosby, Stills & Nash consistently tour, although they have only released four albums since 1982.

In 2016, Nash announced the group wouldn't perform together again.

Crosby's first album, If I Could Only Remember My Name, was released in 1971.

As well as performing with his groups and solo, Crosby collaborated and performed with many famous artists. These include Carole King, Elton John, and James Taylor. He also worked with Phil Collins for several years from the late 1980s through to the early 1990s.

Crosby has been a prolific writer, performer, and recording artist.

As a member of The Byrds, he released 12 studio albums, three live albums, 47 compilation albums, and 29 singles. Two singles went to number one, and these were Mr. Tambourine Man, and Turn! Turn! Turn!, both in 1965.

He has also released three books, the third of which was his autobiography. Called, Long Time Gone: The Autobiography of David Crosby, it was published in 2005.

Crosby appeared in several shows on television in the 1990s. Some of the series include The John Larroquette Show, Roseanne, and Ellen.

In 1982, Crosby went to prison for nine months. Authorities charged him with possession of cocaine and heroin, as well as weapons offenses.

Crosby was arrested again in 1985 concerning a hit-and-run accident. He had a firearm and cocaine in his car, and as a result, that led to his arrest.

In 2004, he had illegal weapons and possession of marijuana, and this led to another arrest.

Crosby married Jan Dance. Before Dance, Crosby was in several long-term relationships, and he has four children.