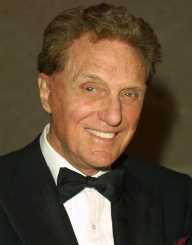 Robert Stack born as Charles Langford Modini Stack was an American actor, television host, and sportsman. Born on January 13, 1919, he is best known for his role in ABC TV series The Untouchables from 1959 to 1963. The part earned him an Emmy Award for Best Actor in a Dramatic Series in 1960. He was also the host of Unsolved Mysteries from 1987 to 2002. Stack starred in numerous feature films, receiving an Academy Award nomination for Best Supporting Actor for playing as Kyle Hadley in Written on the Wind, 1956.

Spending most of his childhood days with his mother in Europe, he learned how to speak Italian and French. He only learned the English language after returning to Los Angeles. His parents later remarried but he lost his father at the age of 10. He enrolled at the University of Southern California where he studied drama.

Robert Stack was highly into sports while growing up. He loved playing polo and was an avid shooter. At the age of 16, he won the International Outboard Motor Championships, in Venice, Italy alongside his brother. He achieved some level of fame at the age of 20. Stack was a member of the All American Skeet Team, setting two world records in skeet shooting and was a national champion. Stack was inducted into the National Skeet Shooting Hall of Fame in 1971.

Robert Stack had a striking look with a deep voice, and that became a point of attraction for many Hollywood producers. He was signed by Universal. Starting with an uncredited role in Bright Eyes, 1934, Stack's debut film was First Love, 1939, starring Deanna Durbin. He followed it with The Mortal Storm, 1940, starring James Stewart and Margaret Sullivan for Metro-Goldwyn-Mayer.

Robert Stack received critical acclaim for his role, landing him a role in A Little Bit of Heaven, 1940, starring Gloria Jean and Nice Girl?, 1941 for Universal. The following year, he starred in the Western film Badlands of Dakota, starring Frances Farmer and Richard Dix. Stack starred in the United Artists film To Be or Not To Be, 1942, playing the role of Polish Air Force pilot.

He also did films like Eagle Squadron and Men of Texas all in 1942, before being drafted to the United States Navy for the World War II. He served as an Aerial Gunnery Officer and gunnery instructor.

After the War, Robert Stack returned to his acting career, starring in numerous films including Fighter Squadron, 1948 for Warner and A Date with Judy, 1948 for MGM. He also starred in Paramount films including Miss Tatlock’s Millions, 1948 and Mr. Music in 1950. In 1951, he starred in Bullfighter and the Lady and supportive role in My Outlaw Brother.

Stack also did low budget films like Conquest of Cochise, 1953, Sabre Jet, 1953 and The Iron Glove in 1954. In 1954, he starred opposite John Wayne in The High and the Mighty, which became successful and critically acclaimed.

In 1956, Robert Stack played in Written on the Wind, which was an instant hit earning him a nomination for an Academy Award for Best Supporting Actor. Other famous works include the award-winning ABC television drama series, The Untouchables from 1959 to 1963. Stack won an Emmy Award for Best Actor for his role. He starred in The Name of the Game from 1968 to 1971, Murder on Flight 502, 1975, Most Wanted, 1976 and the series Strike Force of 1981. He has a Golden Palm Star in the Palm Springs, California, Walk of Stars.

Robert Stack appeared in the comedy 1941 in 1979, receiving positive reviews and that informed his role in other comedy works including Airplane!, 1980, Big Trouble, 1986, Joe Versus the Volcano, and Beavis and Butt-Head Do America, 1996 among others.

Robert Stack married Rosemarie Stack (Bowe) in 1956 until his death. They had two children, Elizabeth Wood Stack and Charles Robert Stack. He died on May 14, 2003, of myocardial infarction. He had suffered prostate cancer and underwent radiation therapy for the disease in October 2002. He was buried at the Westwood Village Memorial Park Cemetery in Westwood, California.