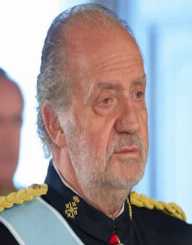 Juan Carlos I was born 5th January 1938, to Juan, Count of Barcelona, and his wife, Maria de las Mercedes of Bourbon-Two Sicilies. Juan Carlos was born in Rome, Italy.He had two younger siblings, and one older. There were several members of the Spanish Royal Family living there, as they were in exile after the proclamation of the Second Spanish Republic in 1931.

In 1948, Juan Carlos moved to Spain where he could do his studies and continue to learn about the political lay of the land through the eyes of his father and General Franco. He completed his studies in 1954, and then went in to the army to do officer training. In 1957, Juan Carlos completed his training at the Military Academy of Zaragoza.

After leaving the military academy, Juan Carlos did a further two years military training. 12 months was at a naval school, the other 12 months at an air force school. He then spent two years in university where he studied law, international politics, and public finance.

Juan Carlos then moved into the Palace of Zarzuela and began working in public life, attending to official engagements.

The rebels won the war and moved into power, led by General Franco.

As  Juan Carlos age advanced, the left wing started to increase their protests. At the same time, the right wing increased their voice for a monarchy. Franco thought long and hard about who would replace him.

The natural heir to the throne was Juan de Borbon. His title was Count of Barcelona. He was overlooked because Franco didn’t trust him Juan Carlos’s cousin was also considered, but Franco came to the decision that  Juan Carlos I  would be the one to succeed him.

In 1969, Juan Carlos was officially named the heir to the throne of Spain and was given the title of Prince of Spain.

Between 1969 and 1975,  Juan Carlos took part in official duties with Franco. Publicly, he was loyal to Franco. Privately, however, he was in consultation with the opposing forces and took counsel from his father.

Juan Carlos was proclaimed King of Spain two days later. He immediately went to work to create reform. This ruffled some feathers within the parliament, but he moved ahead. He sacked the Prime Minister, Carlos Arias Navarro, as Navarro tried to continue with the old policies rather than changing. He was replaced with Adolfo Suarez, and the following year, Suarez became the elected Prime Minister.

In 1977, Juan Carlos’s father renounced his claim to the throne and supported his son as the King of Spain.

There was a foiled military coup in 1981. In 1982, Juan Carlos I  stepped away from being actively involved in the politics of his country. In 1982, the Spanish Socialist Workers’ Party (PSOE) was elected, and its leader, Felipe Gonzalez, moved into power.

Gonzalez governed for over ten years, increasing the stability of Spain.

The King was immune from prosecution under the constitution. Every act the King committed had to be counter-signed by a government official. This made the official responsible rather than the King.

In 2005,  Juan Carlos endorsed the bill to legalize same-sex marriage.

In November 2005, a newspaper poll found that 77.5% of the Spanish people thought he was either good or very good as their leader.

In April 2012,  Juan Carlos received a lot of criticism for taking part in an elephant hunting trip to Botswana. Even though he didn’t pay for the trip himself, Spain was not in a good position. Unemployment was running at 23 percent, and 50 percent among young people.

The hunting trip caused a lot of resentment.

Abdication Of The Throne

In early 2014, media rumors began about the King’s future. He had been through family scandal, and he was also under criticism.

In June 2014, the Prime Minister, Mariano Rajoy, made the announcement that Juan Carlos had announced his intention to abdicate the throne.

The official word was that the King had been considering the abdication for some time because he didn’t want his son to wait for many years before taking the throne. A draft law was passed with 299 in favor of the heir-apparent.

Juan Carlos married Princess Sophia of Greece and Denmark in May 1962. Sophia was the daughter of King Paul of Greece. The couple have three children – two daughters, and a son.

Juan Carlos I  is a keen sailor, and a black belt in karate.