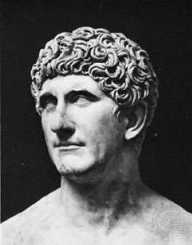 Marcus Antonius also commonly known in English as Mark Antony was one of Rome's politicians. Also, he was a close ally of Julius Caesar as one of his generals and the lover of Queen Cleopatra. Mark was one of the key players in the transformation of the Roman Empire under the leader of Julius Caesar. Together, with the vision of Caesar, they were able to turn Roman into one of the first Republics of all time.

In his time as a general in the ancient Roman army, Mark played a crucial role in crashing the Gaul. After, taking many positions in the Roman Empire, Caesar sent him to  Africa. In Africa, he met with the Queen of Egypt Cleopatra. He fell in love with her. They then committed suicide when their troops failed to fend off their enemies.

Mark Antony was born in Rome around 83 BC to Marcus Antonius Creticus and Julia Antonia. Mark's mother had a distant relation to Julius Caesar. Marks father was one of the officials at the time. Some people say that he was a corrupt and lazy man. So, he was only in power because he was gullible to most of his superiors who would use him. Marks father led a military mission to capture pirates at one time.

However, during this period he died while docking in Crete. Mark and his brother got left in the care of their mother, Antonia. She was not able to take care of the children on her own so, she remarried. Her husband was from a notable family. However, the new husband was always in debt due to his lavish lifestyle. Therefore, this means that Mark and his brother did not receive any attention as young men.

So, they roamed the streets of Rome doing all kinds of obscenities. At one point Mark was accused of having gay relations with another boy. During his younger years, Mark was also a member of a cult. Moreover, he also became a priest of the said cult. Due to his lifestyle, Mark slowly accrued a lot of debt like his stepfather. So, to escape his creditors, he ran away to Greece.

While Mark Antony was still getting his footing in the military service, he met his cousin Antonia Hybrida Minor. So, he proposed to her and they got married around the year 54 and 47 BC. Their marriage got to produce one child, a daughter by the name Antonia Prima. Some people say that this may not have been his first marriage.

Service in the Military

Mark Antony joined the military service under Aulus Gabinius who was the Proconsul of Syria. He got the promotion to the station of Chief of his cavalry. This was in the year 57 BC. Mark got to attain his first military honors when he got significant victories in Machaerus and Alexandrium. This led to the restoration of Hyrcanus as the High Priest in Judea. In their campaign in Egypt, Mark got to meet Princess Cleopatra at the age of 14. Also, he had convinced Gabinius to restore Ptolemy to the throne.

Mark Antony had a close relationship with his commanding officer Gabinius and his patron Publius Clodius Pulcher. Therefore, during his military service, he got to meet a lot of prominent people. Also, he got to attain the attention of these famous people like Julius Caesar. Therefore, he later got to develop a robust political bond with Caesar. Mark then went ahead to join Caesar in his conquest of Gaul. Under Caesar, Mark Antony got to prove his mark in many battles.

So, Caesar gave him the promotion to the rank of Legate. After some time in the land of the Gaul, Caesar sent Mark to Rome. There, Mark would act as the protector of Caesar's interests against Pompey. Therefore, he got the appointment of College of Augurs. In the position, Mark was one of the few people who could be able to interpret Roman gods.  They could do so by learning the movements of the birds. After some time in Rome, Mark got elected as the ten People's Tribune. In 49 BC. So, in his current position, Mark was able to offer protection to Caesar from his political foes. Also, he had the power to override the decisions of the politicians.

The civil war was quickly brewing in Rome. Each side was unwilling to lay down their claims and dialogue. So, the warring factions saw that Mark was Caesar's puppet and evicted from the Senate. Fearing for his life, Mark ran back to Caesar in Gaul. Therefore, Caesar, claiming that the Senate had removed Mark, who was a Tribune, was an act of treason.

Moreover, Marks position in the Senate was sacrosanct. So, he marched the whole of his legion against Rome. The Senate also convened and declared Caesar an enemy of Rome and a war criminal. During the march to Rome, Caesar deputized Mark as his second in command. They won their war and Pompey, and most of the Senate fled. After winning all their battles, Caesar declared himself dictator of Rome. However, he didn't stay in the position for long. He left and gave Mark the power to rule. Mark was unpopular due to his brute ways of leading. Soon Rome was in anarchy forcing Caesar to abandon his campaigns. The acts of Mark caused a strain on their relationship.

After sometime Mark went to be with his mistress Queen Cleopatra. However, during his stay in Egypt, the Egyptians got attacked by enemies. So, Mark pledged to help. However, their troops were defeated. Upon hearing the news, they decided to take their own lives to avoid being captured by the enemies.