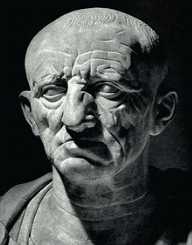 Marcus Porcius Cato was a Roman politician, soldier, and writer. He is also known as Cato the Elder, with his great-grandson being Cato the Younger.

Marcus Porcius Cato was born in 234 BC in the town of Tusculum, Roman Republic. He came from a Plebeian family. His father and grandfather were known for their military prowess. He spent his childhood working on a small farm he inherited. He was exceptionally hard-working and disciplined from a young age.

In 217 BC, Cato joined the Second Punic War. He made important contributions to the Battle of Metaurus and to the Siege of Tarentum. In 205 BC, he became a Quaestor, a type of public official. He spent some time working in Africa and Sicily. In 199 BC, he became an aedile and restored the Plebeian Games. The following year, he became a praetor. He had a large army under his command. He took Sardinia as his province. He enforced strict rules and decreased spending in the region.

Cato became a junior consul in 195 BC. He helped enact the Porcian Laws, which decreased degrading punishments. He supported the Oppian Law, which limited the extravagance of Roman women. He went on a campaign in Hispania. He quickly managed to conquer that region. He returned to Rome, where he received many prizes for his warfare. His position as consul ended in 194 BC. In 191 BC, he served as a lieutenant in the Battle of Thermopylae. He then made a diplomatic visit to Athens.

Cato returned to Rome and continued his work. He cleaned the sewers and repaired the aqueducts. He built a basilica in the Roman Forum. He often gave speeches in public. He continued to appear in the Senate, even though he no longer had an official position. He tried to impose regulations against excessive luxury.

Cato was one of the first Roman authors to write in Latin. He helped solidify the status of Latin as the literary language of Rome. In 160 BC, he wrote a manual on running a farm, called On Agriculture. He later wrote another manual, called On Soldiery. He wrote the historical work Origins, composed of seven books. In it, he talked about the historical development of Italian towns. He wrote down his political speeches and put them together in a collection. He also wrote poetry and short sayings.

Many of Cato’s descendants achieved great success in Roman politics. His great-grandson, Cato the Younger, became famous for his conflict with Julius Caesar.