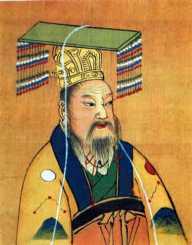 Empower Wu of Han born Liu Che was the seventh emperor of the Han dynasty of China. Born on June 30, 156 BC, he reigned from 141 to 87 BC lasting for 54 years. His longevity on the throne was not broken until, 1800 years later during the rule of Kangxi Emperor. During his reign, Empower Wu of Han was able to expand the territory of his kingdom from now Kyrgyzstan in the east, to Korea I the east and northern Vietnam in the south. He developed a strong and centralized state and promoted the doctrines of Confucian. Emperor Wu has been known for his love for music and poetry as he developed the Imperial Music Bureau into a renowned entity. There was also the introduction of new crops and items into the dynasty during his rule.

Empower Wu of Han was born on June 30, 156 BC as the 10th son of Liu Qi and Wang Zhi. In 156 BC, Liu Qi ascended to the throne as Empower Jing of Han after the death of his father, Emperor Wen. Empower Wu of Han asserted that she dreamed of a sun falling into her womb while pregnant to Liu Che. Emperor Zhi found the dream as divine that in 153, at a very young age he made Liu Che the Prince of Jiaodong and made Wang a consort. At a very young at of five, Wang accepted that Liu Cheis married to A’jiao, daughter of Emperor Jing’s older sister Princess Guantao.

Guantoa had previously wanted to marry A’jiao to crown prince Liu Piao, the eldest son of Empower Jing Lady Li but Li objected to it. The acceptance of Wang became a blessing as it boosted her relationship with Guantao who turned against Lady Li and started undermining her. Buying into the words of her sister and several other conspiracies, the Emperor removed Liu Rong as crown prince to the position of Prince of Linjiang and exiled him from the capital Chang’an in 150 BC. Lady Li was put under house arrest and died of depression while Liu Rong also committed suicide in custody after he was arrested for illegal seizure of Imperial shrine lands. With this consort, Wang became the empress and Liu Che the crown price in 149 BC. After the death of Empower Wu of Han in 141 BC, Liu Che ascended the throne as Emperor Wu at age 15. His mother became Empress Dowager Wang and his wife Empress Chen and grandmother as Grand Empress Dowager Dou.

Empower Wu of Han made several changes in policies of his predecessors and introduced initiatives to curb the various challenges during such rules. His reforms were inspired by advised from Confusion scholars. He launched the reforms, which is known as the Jianyuan Reforms that sought five policies including; adopting Confucianism as the national philosophy by shunning the previously held libertarian Taoist ideals, evicting noblemen to their own feudal and elimination non-central government sanctioned checkpoints. Others were encouraging the reporting and subsequent prosecution of criminal activities of the nobles who were previously untouchable and recruiting and promoting talented commoners into government positions. These reforms became unpopular among the noble class and were objected by Grand Empress Dowager Dou who was very powerful in the Han court. This resulted in the punishment of some of the reformist including stripping off the positions of Wu's two noble supporters Dou Ying and Tian Fen Empress Dowager Wang’s half-brother.

Others like Wang Zang and Zhao Wan were impeached, arrested, and forced to commit suicide in prison. Emperor Wu was now left without allies and conspiracies were made to dethrone him. Secondly, he also had no child with his wife Empress Chen, which also became a weapon used against him. Empower Wu of Han, however, countered these by adopting several strategies and having control over the military, which was under his grandmother. He was also able to get his concubine, Wei Zifu pregnant and that settled the agitations of his childlessness. Grand Empress Dowager Dou died in 135 BC, and that became a great relief for his political stability. After the death of his greatest obstacle, Emperor Wu sought to expand the empire and therefore embarked on several military campaigns, which proved successful despite initial challenges.

Empower Wu of Han became brutal in his rule and executed many of his opposition and people who challenged his policies. His sought for immortality, power, and other expenditure began to have a tow on the national treasury with some of his governors committing suicide because they could not fulfill the demands of the Emperor. His expansion expenditure continued, and elimination so-called saboteurs increased which his son Crown Prince Ju suffered the same fate as he was killed in an alleged revolt against the Emperor. This was later realized to be false, but the harm had already been done. Empower Wu of Han lived to regret such a grievous mistake. Emperor Wu died in 87 BC and was succeeded by his youngest son Prince Fuling was he made a crown prince shortly before his death.