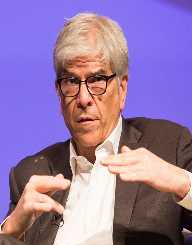 Robert Lucas was born on September 15, 1937. He is an American economist. He received the Nobel Prize for developing the theory of Rational Expectations. The theory explains how individual people take their own economic decisions based upon their past experiences disregarding the results forecast be national agencies depending on their monetary and fiscal policies.

Robert Lucas Jr. was born on September 15, 1937, in Yakima, Washington DC. He was born to Robert Emerson Lucas and Jane Templeton. He was brought up alongside three siblings, Peter, Daniel and Jenepher. In 1937, their restaurant called The Lucas Ice Creamery was shut down due to the economic recession. During World War II, his family moved to Seattle where he father began working as a welder in a refrigeration company, and his mother worked as a fashion artist. He attended Seattle Public Schools.

In 1963, Robert Lucas Jr started teaching at the Graduate School of Industrial Administration at the Carnegie Mello University. He taught in the school until 1975. In 1972, he developed a model which had expectations of future prices and quantities incorporated into it. In 1975, he became a professor of economics at the University of Chicago. The following year he developed the Lucas Critique which challenged the foundations of the macroeconomic theory. The critique further explained the relationship between inflation and unemployment.

In 1980, Robert Lucas Jr became a John Dewey Distinguished Service Professor Emeritus in Economics at the University of Chicago. He later developed the theory of supply which suggests that people can be tricked by unsystematic monetary policy. In 1981, he published a collection of his research work titled ‘Studies in Business Cycle Theory.’ In 1987, he published his book ‘Models of Business’ which was an overview of the economic theory.

Robert Lucas Jr also developed the Uzawa-Lucas Model alongside Hirofumi Uzawa and the Lucas Paradox which explains the reasons behind the small flow of capital from developed nations to developing nations. He contributed to behavioural economics which assisted in understanding the deviations that occur in the law of one price due to the irrationality of investors. In 1997, he was appointed the President of the Econometric Society. In 2002, he became the President of the American Economic Association.

In 1959, Robert Lucas Jr married Rita Cohen with who he has two sons, Joseph and Stephen. In 1982, he separated from Rita and divorced her in 1988. In 1982, he married Nancy Stokey with whom he has collaborated with in writing several papers on public finance, monetary theories, and growth. He is currently seventy nine years old.