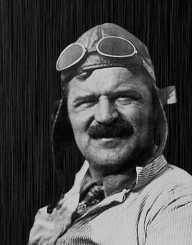 Louis Chevrolet was born on the 25 December 1878 in La Chaux-de-Fonds in Switzerland. He was one of seven children born to clockmaker Joseph-Felicien and his wife, Marie-Anne Angéline Mahon. The family moved to France when Chevrolet was eight years old.

His early career involved working for a wine merchant, and during that time Louis Chevrolet designed a wine-barrel pump. He also built bicycles, selling them under the brand Frontenac. When Chevrolet was eighteen years old, he moved to Montreal, Canada and worked as a chauffeur. Motorcars in those days required some mechanical knowledge. The following year he moved to America.

Mechanically minded, Chevrolet got a job at Fiat in New York City and was exposed to the emerging sport of motor racing. His first break in racing came in May 1905 when he drove a 90-HP Fiat at the Hippodrome in Morris Park, New York. After beating established driver Barney Oldfield a couple of times, he started making a name for himself.

In 1906 Louis Chevrolet started working on the design of a racing car. He got involved with Walter Christie designing a front-drive VB racing car. In 1910, William C Durant commissioned Chevrolet to design a car, and a company was formed the Chevrolet Motor Company. The two men had conflicting views because Chevrolet wanted to build luxury vehicles whereas Durant wished to compete with Henry Ford by making the cars accessible to everyone at a reasonable price.

Chevrolet left the company in 1913 and made the mistake of selling his stock. The stock went on to become extremely valuable and would have made him a wealthy man. Durant went on to expand the business, eventually trading his Chevrolet stocks for General Motors stock.

Chevrolet continued racing and building cars. He started Frontenac Motor Corp with Albert Champion, but this partnership ended badly. Chevrolet was declared bankrupt and was forced to move to Detroit where he found a job working as a mechanic in the Chevrolet Division of General Motors.

Louis Chevrolet and his brother Arthur built cylinder heads for Model T Fords in the 1920s. In 1925, Chevrolet started thinking about aviation and in 1926, he was working with a group of investors on the idea of developing an airplane engine. The brothers built their first aviation engine in 1927. Shortly afterward the brothers had a fallout.

Chevrolet then started the Chevrolet Aircraft Corporation and worked on developing a new engine. His brother Arthur meanwhile produced the Chevalier in 1929. Arthur Chevrolet had some success with his engine, but the stock market crash of 1929 affected his business; and by 1932, his company was in receivership.

In 1928, Louis Chevrolet sold 90% of the Chevrolet Aircraft Corporation to Glenn L. Martin. He remained as the president of the company, and in 1929, Chevrolet patented his engine design. In 1931, the company was changed to Glenn L Martin Motors, and he was appointed General Manager. He resigned soon afterward, retaining 1000 shares. In 1939 Martin sold the patent rights and existing inventory of engines and spare parts to the Phillips Aviation Corporation.

Louis Chevrolet was married to Suzanne Treyvoux, and the couple had two sons: Charles Louis and Alfred Joseph.

His brother Gaston Chevrolet was killed in a race in Los Angeles, California in 1920. Louis Chevrolet was devastated at the loss of his brother and gave up motor racing, instead concentrating on building cars and re-conditioning engines.

Chevrolet fell ill and retired to Florida. He was on a visit to Detroit when he died at age 63 on 6th June 1941.