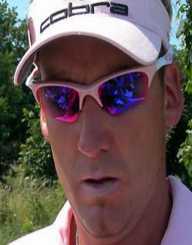 Ian Poulter is an English professional golfer. He was born on January 10th, 1976. During his colorful career, Poulter has been ranked top five in the world golf ranking. He is most remembered for his remarkable performance during the World Golf Championship in 2010 and the 2012 WGC-HSBC Championship.

Ian Poulter was born in Stevenage, England. His love for the game started at a tender age of 4; his father worked as a Single-digit handicapper.

Due to the cost of golf tools, Poulter started working to facilitate his game. He worked in a store and sold shirts. His hard work and tenacity pushed him towards success. He later joined Leighton Buzzard, private golf club as an assistant pro, where he received golf lessons at $1.16 per session.

Ian Poulter started playing golf at the top level in 1996, winning his first trophy in 1999 de Côte d'Ivoire. His win saw him promoted to the European Tour. After his promotion to the European tour, he went on to win a series of competitions including, the Italian Open, the Moroccan Open, Celtic Manor Resort Wales open and finally Nordic Open.

In 2002, Poulter missed a place in the Ryder Cup Team; however, he was among the winning team in of 2004. The winning try was taken by him.

His success in Ryder Cup has helped shelve his inability to win a trophy in a major tournament. His closest came when he came in the Players Championship when he finished second.

Katie is Pouter's wife. They both reside in Lake Nona Golf and country club in Florida. They have four children together.

Ian Poulter is known by many for his sense of fashion and unique styles. In a championship in 2004, he played the first round of the game on Union Jack Trousers. His passion for fashion has led him to start his clothing line. He has on several occasions put up colorful hairstyles.

Ian Poulter faced the fury of the public in 2010 when he used an improper name to refer to the Tottenham Hotspur fans in his twitter handle. Poulter has since apologized for his mistake.

His video of him and his family eating from the Ryder Cup sparked a lot of controversies. He called Matsuyama, Japanese golf pro an ‘idiot' for accidentally damaging the 13 Green.