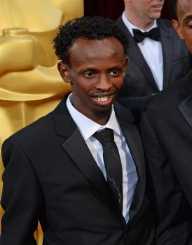 Barkhad Abdi was born on April 10th in 1985. He is celebrated for being a Somali-American actor. Similarly, he is also famed for his talented directing skills. He recently made his film debut in 2013. This was while featuring in Captain Philips, a 2013 survival thriller film. Things turned out bright for him as he was bestowed with some awards and nominations due to his exceptional performance. He also received an Academy Award nod for Best Supporting Actor during the same period.

Barkhad Abdi was born on April 10th, in 1985. His place of birth was in Mogadishu, Somalia. His father worked as a school teacher. In 1991, Somalia’s civil war erupted which interrupted his education. Moreover, he had to flee with his family to Yemen. Around this time, Abdi was only seven years of age and that the only place of refuge was where his father worked; Yemen.

Later on, in 1999, his family again moved. This time they migrated to Minneapolis, Minnesota. This is a location where a good number of Somalis reside in. After that, Abdi enrolled at Minnesota State University Moorhead.

Before venturing into the film industry, Abdi took some jobs that earned him income. First, he went to work in his brother’s shop in Minneapolis where he sold mobile phones. Later, he took another job as a limousine driver for one of his relative’s chauffeur organization. Besides this, there is evidence that indicates he also worked as a club DJ.

2013 was a lucky year for Abdi. He played the lead role in Captain Phillips – 2013. He was cast as Abduwali Muse; the pirate hijacker in the film. This was a role that was auditioned by up to 700 candidates.

Owing to his exceptional performance, Abdi was hailed by the film industry. As a result, he was listed as part of the nominees for the Screen Actors Guild Award featuring the Best Supporting Actor. Similarly, other nominations followed suits such as one for Academy Award and Golden Globe Award. He was crowned the Best Supporting Actor under the BAFTA Award. His unique role in the exhilarating Captain Philips film earned him $65, 000. Soon after the production of the film came to an end, Abdi resumed his work as his brother’s shop assistant.

In early 2014, Barkhad Abdi was selected to narrate scripts for one of the television shows. Additionally, he earned himself a minor role in one of the episodes of the action series named Hawaii Five-0. Afterward, he featured in Eye in the Sky- 2015. The following year he also made an appearance in The Brothers Grimsby.